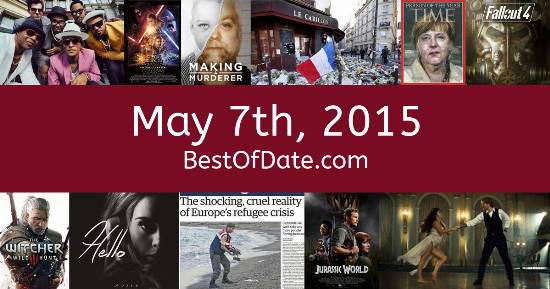 Songs that were on top of the music singles charts in the USA and the United Kingdom on May 7th, 2015:

The date is May 7th, 2015 and it's a Thursday. Anyone born today will have the star sign Taurus. The summer of 2015 has finally arrived. The weather has warmed up and the evenings are brighter than usual.

The song See You Again by Wiz Khalifa featuring Charlie Puth is on top of the singles charts in both the USA and the United Kingdom. Barack Obama is currently the President of the United States and the movie Avengers: Age of Ultron is at the top of the Box Office. In the United Kingdom, David Cameron is the current Prime Minister.

A social networking website called Vine is extremely popular at the moment. It's 2015, so the music charts are being dominated by the likes of OMI, Bruno Mars, Ellie Goulding, Adele, Justin Bieber and Hozier. Caitlyn Jenner has recently come out as a trans woman during a "20/20" interview with Diane Sawyer.

In boxing, Floyd Mayweather has defeated Manny Pacquiao by unanimous decision. The fight had been one of the most anticipated sporting events in history. In soccer, Jose Mourinho has just led Chelsea to their fifth Premier League title. In the United Kingdom, people are currently voting in the 2015 general election. The result is expected to be close.

On TV, people are watching popular shows such as "Game of Thrones", "Homeland", "Black Mirror" and "House of Cards". Meanwhile, gamers are playing titles such as "Destiny", "Alien: Isolation", "Assassin's Creed: Unity" and "Mortal Kombat X". Kids and teenagers are watching TV shows such as "Jessie", "Lab Rats: Bionic Island", "Every Witch Way" and "Henry Danger".

Notable events that occurred around May 7th, 2015:

Who was the Prime Minister of the United Kingdom on May 7th, 2015?

Enter your date of birth below to find out how old you were on May 7th, 2015.

Looking for some nostalgia? Here are some Youtube videos relating to May 7th, 2015. Please note that videos are automatically selected by Youtube and that results may vary! Click on the "Load Next Video" button to view the next video in the search playlist. In many cases, you'll find episodes of old TV shows, documentaries, music videos and soap dramas.