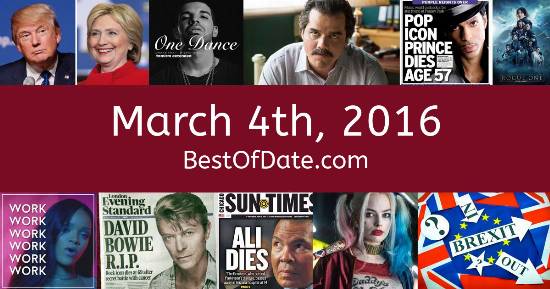 Songs that were on top of the music singles charts in the USA and the United Kingdom on March 4th, 2016.

The date is March 4th, 2016, and it's a Friday. Anyone born today will have the star sign Pisces. Currently, people have "that Friday feeling" and are looking forward to the weekend.

Spring has started to creep in and the days are beginning to get longer. In America, the song Love Yourself by Justin Bieber is on top of the singles charts. Over in the UK, 7 Years by Lukas Graham is the number one hit song.

Barack Obama is currently the President of the United States, and the movie Deadpool is at the top of the Box Office. In the United Kingdom, David Cameron is the current Prime Minister. It's 2016, so the music charts are being dominated by artists such as Drake, Lukas Graham, Sia, Mike Posner, The Chainsmokers and Calvin Harris.

UFC fans are excited about the upcoming fight between Nate Diaz and Conor McGregor at UFC 196. This will be the first fight between the pair. A video called "Damn Daniel" has recently become a viral hit. Social network Facebook has released its new "reaction" buttons. This new feature gives users the ability to react to posts with various emojis instead of just the like button.

In Ireland, the 2016 Irish general election has just taken place. Fine Gael have remained as the largest party despite losing 26 seats and Labour have been reduced to 7 TDs. In England, soccer player Adam Johnson has recently been found guilty of sexual activity with a child. If you were to travel back to this day, notable figures such as Rob Ford, Johan Cruyff, Chyna and Prince would all be still alive.

On TV, people are watching popular shows such as "Suits", "House of Cards", "Power" and "Black-ish". Meanwhile, gamers are playing titles such as "Batman: Arkham Knight", "Rocket League", "Fallout 4" and "XCOM 2". Children and teenagers are currently watching television shows such as "Dora the Explorer", "Mickey Mouse Clubhouse", "Jake and the Never Land Pirates" and "Sheriff Callie's Wild West".

These are trending news stories and fads that were prevalent at this time. These are topics that would have been in the media on March 4th, 2016.

Check out our personality summary for people who were born on March 4th, 2016.

Barack Obama was the President of the United States on March 4th, 2016.

David Cameron was the Prime Minister of the United Kingdom on March 4th, 2016.

Enter your date of birth below to find out how old you were on March 4th, 2016.
This information is not transmitted to our server.

Here are some fun statistics about March 4th, 2016.