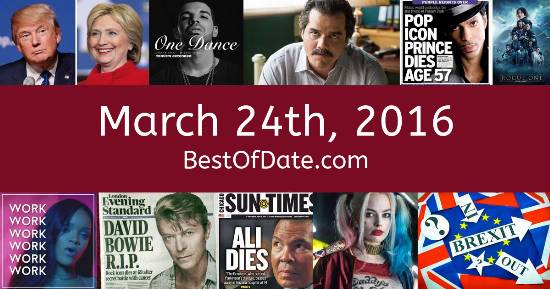 On March 24th, 2016, the following songs were at the top of the music charts in the USA and the UK.

The top "Box Office" movie on this date was the film "Zootopia".

The date is March 24th, 2016, and it's a Thursday. Anyone born today will have the star sign Aries. Spring has arrived and the days have become longer.

In America, the song Work by Rihanna featuring Drake is on top of the singles charts. Over in the UK, I Took a Pill in Ibiza by Mike Posner is the number one hit song. Barack Obama is currently the President of the United States, and the movie Zootopia is at the top of the Box Office.

Barack Obama has just visited Cuba, becoming the first US president to do so in 88 years. ISIS has struck the Belgium city of Brussels with three coordinated suicide bombings, leaving 32 people dead. The hashtag #JeSuisBruxelles (#IamBrussels) is currently being used on Twitter to show support. Meanwhile, several famous structures around the world are being illuminated with the colours of the Belgian flag. Former controversial Toronto Mayor Rob Ford has just passed away at the age of 46 after a battle with cancer.

The world of Hip Hop is in mourning following the death of "A Tribe Called Quest" member Phife Dawg due to complications relating to diabetes. Dutch soccer legend Johan Cruyff has died after a battle with cancer. Stand-up comedian Garry Shandling has passed away after experiencing a pulmonary embolism.

If you were to travel back to this day, notable figures such as Johan Cruyff, Chyna, Prince and Muhammad Ali would all be still alive. On TV, people are watching popular shows such as "Grey's Anatomy", "Modern Family", "Power" and "Jane the Virgin". Meanwhile, gamers are playing titles such as "Cities: Skylines", "Rocket League", "Assassin's Creed Syndicate" and "Firewatch".

Children and teenagers are currently watching television shows such as "Mickey Mouse Clubhouse", "Doc McStuffins", "Paw Patrol" and "Girl Meets World". Popular toys at the moment include the likes of the PlayStation 4, the Xbox One, Barbie Saddle n Ride and Star Wars BB-8 toy droid.

These are trending news stories and fads that were prevalent at this time. These are topics that would have been in the media on March 24th, 2016.

Check out our personality summary for people who were born on March 24th, 2016.

Bodybuilder. Deceased
Born on March 24th, 1989
He was not alive on this date.

Barack Obama was the President of the United States on March 24th, 2016.

David Cameron was the Prime Minister of the United Kingdom on March 24th, 2016.

Enter your date of birth below to find out how old you were on March 24th, 2016.
This information is not transmitted to our server.