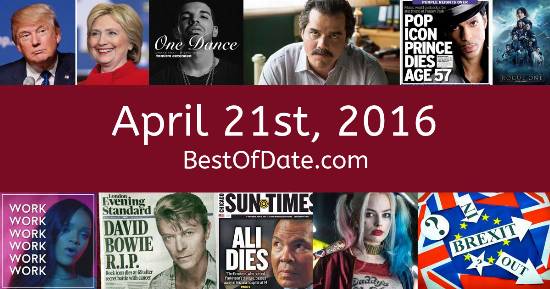 Songs that were on top of the music singles charts in the USA and the United Kingdom on April 21st, 2016.

The date is April 21st, 2016 and it's a Thursday. Anyone born today will have the star sign Taurus. The summer of 2016 is drawing closer and temperatures have started to rise.

In America, the song Work by Rihanna featuring Drake is on top of the singles charts. Over in the UK, One Dance by Drake is the number one hit song. Barack Obama is currently the President of the United States and the movie The Jungle Book is at the top of the Box Office.

The Panama Papers have just been leaked. The leak contains 11.5 million documents relating to offshore entities. English soccer side Aston Villa have been relegated from the Premier League after 24 years in the top flight. Wrestling fans are in mourning following the news that former WWF wrestler Chyna has died from an accidental drug overdose.

The world is in shock following the sudden death of singer Prince. If you were to travel back to this day, notable figures such as Prince, Muhammad Ali, Kimbo Slice and Christina Grimmie would all be still alive. On TV, people are watching popular shows such as "Black Mirror", "Peaky Blinders", "Gotham" and "Jane the Virgin".

Meanwhile, gamers are playing titles such as "Lego Jurassic World", "Halo 5: Guardians", "Rise of the Tomb Raider" and "Tom Clancy's The Division". Children and teenagers are currently watching television shows such as "The Fairly OddParents", "Mickey Mouse Clubhouse", "Nicky, Ricky, Dicky & Dawn" and "Bunnicula". Popular toys at the moment include the likes of the PlayStation 4, the Xbox One, Barbie Saddle n Ride and Star Wars BB-8 toy droid.

Barack Obama was the President of the United States on April 21st, 2016.

David Cameron was the Prime Minister of the United Kingdom on April 21st, 2016.

Enter your date of birth below to find out how old you were on April 21st, 2016.