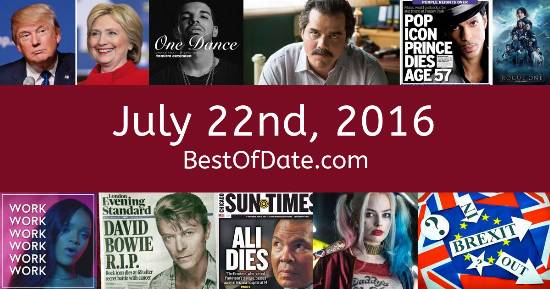 Songs that were on top of the music singles charts in the USA and the United Kingdom on July 22nd, 2016.

The date is July 22nd, 2016 and it's a Friday. Anyone born today will have the star sign Cancer. Currently, people have "that Friday feeling" and are looking forward to the weekend.

The UK has just voted to leave the European Union and Prime Minister David Cameron has resigned. The British Pound has tumbled to historic lows in the aftermath of the Brexit vote. An augmented reality mobile game called Pokémon GO has recently been released. The game is rapidly rising in popularity. Theresa May has become the new Prime Minister of the United Kingdom.

The world is reacting to a horrific terrorist attack that has just claimed the lives of 86 people in Nice, France. The perpetrator drove a cargo truck into crowds of people as they were celebrating Bastille Day. Republican nominee Donald Trump has just announced Mike Pence as his running mate for the 2016 election. Kim Kardashian has released Snapchat footage of a call between her husband Kanye West and Taylor Swift. The video shows Taylor giving Kanye permission to rap about her in the song "Famous".

A plagiarism controversy has exploded after Donald Trump's wife Melania uses parts of a Michelle Obama speech from 2008 for her address at the Republican National Convention. If you were to travel back to this day, notable figures such as Fidel Castro, Big Syke, George Michael and Carrie Fisher would all be still alive. On TV, people are watching popular shows such as "The Walking Dead", "American Horror Story", "Orange Is the New Black" and "Stranger Things".

Meanwhile, gamers are playing titles such as "Grand Theft Auto V", "Fallout 4", "Tom Clancy's The Division" and "Uncharted 4: A Thief's End". Kids and teenagers are watching TV shows such as "Girl Meets World", "Henry Danger", "Bunnicula" and "The Loud House". If you're a kid or a teenager, then you're probably playing with toys such as the PlayStation 4, Barbie Saddle n Ride, Star Wars BB-8 toy droid and L.O.L. Surprise!.

Barack Obama was the President of the United States on July 22nd, 2016.

Theresa May was the Prime Minister of the United Kingdom on July 22nd, 2016.