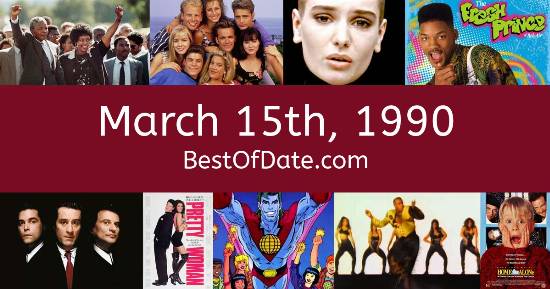 Songs that were on top of the music singles charts in the USA and the United Kingdom on March 15th, 1990.

The date is March 15th, 1990 and it's a Thursday. Anyone born today will have the star sign Pisces. Spring has started to creep in and the days are beginning to get longer.

St. Patrick's Day is just around the corner. In America, the song Escapade by Janet Jackson is on top of the singles charts. Over in the UK, Dub Be Good To Me by Beats International is the number one hit song.

George W. Bush Snr. is currently the President of the United States and the movie Driving Miss Daisy is at the top of the Box Office. In the United Kingdom, Margaret Thatcher is the current Prime Minister. Texting is not a thing yet. Instead, people are using landline phones and pagers. Furthermore, the vast majority of people still have no idea what "the Internet" is.

In fashion, many of the trends from the late 80s are still popular. Colored tights, denim overalls, leotards, flannel shirts and shoulder pads are all fashionable at the moment. It's 1990, so the airwaves are being dominated by music artists such as Sinéad O'Connor, Paula Abdul, Janet Jackson, Vanilla Ice, Mariah Carey, Stevie B, Madonna and MC Hammer. The Soviet Union has declared that Lithuania's declaration of independence from the USSR is "invalid". Meanwhile, Soviet troops have started to withdraw from Hungary.

British journalist Farzad Bazoft has been hanged to death in Iraq for spying for Israel, despite any conclusive evidence. Fernando Collor de Mello has become the first democratically-elected president of Brazil in over 25 years. If you were to travel back to this day, notable figures such as Sammy Davis, Jr, Stevie Ray Vaughan, Roald Dahl and John Bardeen would all be still alive.

Popular toys at the moment include the likes of Transformers, Jenga, Teenage Mutant Hero Turtles figures and the Game Boy.

If you are looking for some childhood nostalgia, then check out March 15th, 1996 instead.

French soccer player.
Born on March 15th, 1993
He was born exactly 3 years after this date.

Margaret Thatcher was the Prime Minister of the United Kingdom on March 15th, 1990.

Enter your date of birth below to find out how old you were on March 15th, 1990.