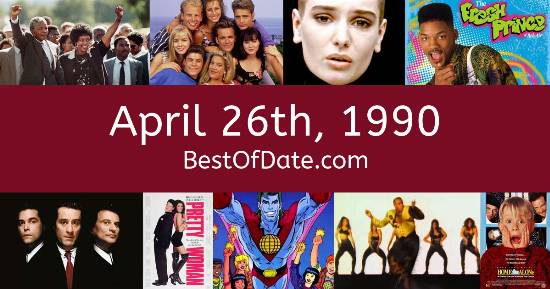 On April 26th, 1990, the following songs were at the top of the music charts in the USA and the UK.

The date is April 26th, 1990, and it's a Thursday. Anyone born today will have the star sign Taurus. The summer of 1990 is drawing closer and temperatures have started to rise.

Lebanese kidnappers have released American business professor Robert Polhill after three years of holding him captive. The Hubble Space Telescope has just been launched into space. Meanwhile, in Europe, West Germany and East Germany have agreed to merge their economies. If you were to travel back to this day, notable figures such as Sammy Davis, Jr, Stevie Ray Vaughan, Roald Dahl and John Bardeen would all be still alive.

On TV, people are watching popular shows such as "Columbo", "Charles in Charge", "Full House" and "In the Heat of the Night". Meanwhile, gamers are playing titles such as "Gain Ground", "Super Mario Land", "Super Mario World" and "World Cup Italia '90". Children and teenagers are currently watching television shows such as "The Smurfs", "Adventures of the Gummi Bears", "Married... with Children" and "The Simpsons".

If you're a kid or a teenager, then you're probably playing with toys such as My Little Pony (figures), the Nintendo Entertainment System, Popples and the Game Boy.

These are trending news stories and fads that were prevalent at this time. These are topics that would have been in the media on April 26th, 1990.

Check out our personality summary for people who were born on April 26th, 1990.

If you are looking for some childhood nostalgia, then you should check out April 26th, 1996, instead.

Celebrities, historical figures, and other notable people who were born on April 26th.

Enter your date of birth below to find out how old you were on April 26th, 1990.
This information is not transmitted to our server.