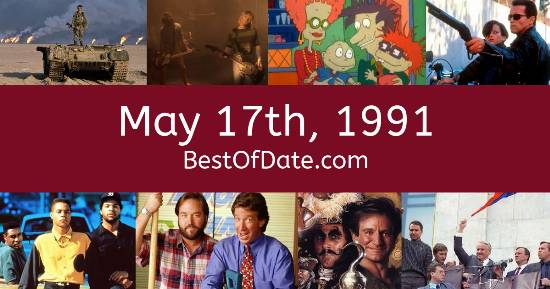 Songs that were on top of the music singles charts in the USA and the United Kingdom on May 17th, 1991:

The date is May 17th, 1991 and it's a Friday. Anyone born today will have the star sign Taurus. Currently, people have "that Friday feeling" and are looking forward to the weekend.

The summer of 1991 has finally arrived. The weather has warmed up and the evenings are brighter than usual. In America, the song I Like The Way by Hi-Five is on top of the singles charts. Over in the UK, It's In His Kiss by Cher is the number one hit song.

George W. Bush Snr. is currently the President of the United States and the movie What About Bob? is at the top of the Box Office. In the United Kingdom, John Major is the current Prime Minister. In fashion, many of the trends from the late 80s are still popular. Colored tights, denim overalls, leotards, flannel shirts and shoulder pads are all fashionable at the moment.

Queen Elizabeth II is currently visiting the United States on a 13-day royal visit. In France, Édith Cresson has just become the country's first ever female prime minister. On TV, people are watching popular shows such as "Only Fools and Horses", "Star Trek: The Next Generation", "Twin Peaks" and "The Flash".

Notable events that occurred around May 17th, 1991:

Who was the Prime Minister of the United Kingdom on May 17th, 1991?

Looking for some nostalgia? Here are some Youtube videos relating to May 17th, 1991. Please note that videos are automatically selected by Youtube and that results may vary! Click on the "Load Next Video" button to view the next video in the search playlist. In many cases, you'll find episodes of old TV shows, documentaries, music videos and soap dramas.