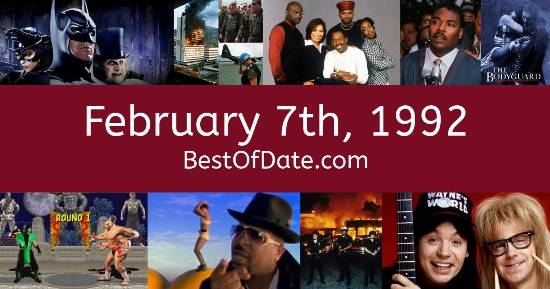 Songs that were on top of the music singles charts in the USA and the United Kingdom on February 7th, 1992.

The movie "Medicine Man" was at the top of the box office on February 7th, 1992.

The date is February 7th, 1992 and it's a Friday. Anyone born today will have the star sign Aquarius. Currently, people have "that Friday feeling" and are looking forward to the weekend.

Valentine's Day is just around the corner. In America, the song I'm Too Sexy by Right Said Fred is on top of the singles charts. Over in the UK, Goodnight Girl by Wet Wet Wet is the number one hit song.

A civil war is currently taking place in the African country of Rwanda. It's 1992, so radio stations are being dominated by the likes of Kris Kross, Boyz II Men, Whitney Houston, Sir Mix-a-Lot, Right Said Fred, Snap! and Nirvana. Department chain Macy's has just filed for Chapter 11 bankruptcy protection amid mounting losses and an estimated debt of around $5.3 billion.

In Ireland, Charles Haughey has resigned as leader of Fianna Fail. His resignation comes on the back of recent revelations that he authorized the phone-tapping of two journalists back in 1982. Following the recent breakup of the Soviet Union, Russian president Boris Yeltsin and US president George H. W. Bush have announced that they will both stop aiming nuclear weapons at one another. Furthermore, the pair have met at Camp David and formally declared that the Cold War is officially over. The trial of four police officers for the beating of Rodney King back in March of 1991 has recently started in Simi Valley, California.

In Venezuela, Major Hugo Chávez has just been arrested after leading a failed coup attempt against President Carlos Andrés Pérez. In soccer, Kevin Keegan has just become the new manager of English side Newcastle United. In Milwaukee, the trial of suspected serial killer Jeffrey Dahmer is still ongoing. Dahmer has been charged with four counts of first-degree murder.

New Hip-Hop duo Kris Kross have just released their debut song "Jump". In the Netherlands, the Maastricht Treaty has been signed. The signing of this treaty has founded the European Union (EU). The treaty will come into effect on the 1st of November, 1993. On TV, people are watching popular shows such as "Teenage Mutant Ninja Turtles", "Saved by the Bell", "Blossom" and "Darkwing Duck".

Meanwhile, gamers are playing titles such as "Battletoads", "Sonic the Hedgehog", "Civilization" and "Desert Strike ". Kids and teenagers are watching TV shows such as "Roseanne", "Saved by the Bell", "Are You Afraid of the Dark?" and "Clarissa Explains It All". If you're a kid or a teenager, then you're probably playing with toys such as Sylvanian Families, Teenage Mutant Hero Turtles figures, the Game Boy and the Super Nintendo Entertainment System (SNES).

If you are looking for some childhood nostalgia, then check out February 7th, 1998 instead.

George W. Bush Snr. was the President of the United States on February 7th, 1992.

John Major was the Prime Minister of the United Kingdom on February 7th, 1992.

Enter your date of birth below to find out how old you were on February 7th, 1992.

Here are some fun statistics about February 7th, 1992.

Have something to say about February 7th, 1992?