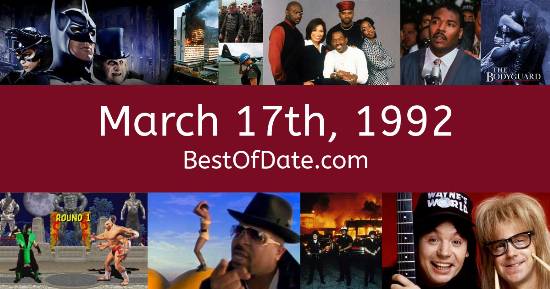 These songs were on top of the music charts in the United States and the United Kingdom on March 17th, 1992.

The movie "Wayne's World" was at the top of the Box Office on this day.

The date is March 17th, 1992, and it's a Tuesday. Anyone born today will have the star sign Pisces. Spring has arrived and the days have become longer.

It's St. Patrick's Day, which means that a sizeable amount of people are spending their day in bars. Parades are being held in major cities throughout the world. In America, the song Save The Best For The Last by Vanessa Williams is on top of the singles charts. Over in the UK, Stay by Shakespears Sisters is the number one hit song.

George W. Bush Snr. is currently the President of the United States, and the movie Wayne's World is at the top of the Box Office. In the United Kingdom, John Major is the current Prime Minister. Texting is not a thing yet. Instead, people are using landline phones and pagers. Furthermore, the vast majority of people still have no idea what "the Internet" is.

In Australia and New Zealand, the 1992 Cricket World Cup is currently taking place. The trial of four police officers for the 1991 beating of Rodney King back is currently taking in Simi Valley, California. In the United Kingdom, Prime Minister and Conservative Party leader John Major has just called a general election for the 9th of April. This will be Major's first election at the helm since he took over from Margaret Thatcher.

Following the recent collapse of the Soviet Union, President Boris Yeltsin has announced his government's intentions to create a new and separate Russian army. Arkansas Governor Bill Clinton has become the presumptive nominee for the Democratic Party after winning the primary elections in Illinois and Michigan. It is now likely that Clinton will face off against Republican incumbent George H. W. Bush in this year's presidential election. If you were to travel back to this day, notable figures such as Robert Reed, Anthony Perkins, Audrey Hepburn and Thurgood Marshall would all be still alive.

On TV, people are watching popular shows such as "Last of the Summer Wine", "The Cosby Show", "MacGyver" and "Baywatch". Meanwhile, gamers are playing titles such as "Duck Hunt", "Sonic the Hedgehog", "F-Zero" and "Civilization". Children and teenagers are currently watching television shows such as "The Wonder Years", "Garfield and Friends", "The Fresh Prince of Bel-Air" and "Dinosaurs".

Popular toys at the moment include the likes of the Easy-Bake Oven, My Little Pony (figures), Yo-yo and the SEGA Game Gear.

These are trending news stories and fads that were prevalent at this time. These are topics that would have been in the media on March 17th, 1992.

News stories and other events that happened around March 17th, 1992.

Check out our personality summary for people who were born on March 17th, 1992.

If you are looking for some childhood nostalgia, then you should check out March 17th, 1998 instead.

Find out what your age was on March 17th, 1992, by entering your DOB below.
This information is not saved on our server.