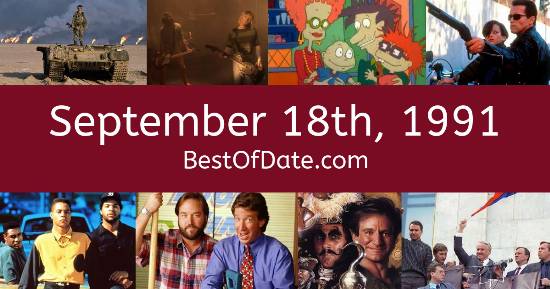 Songs that were on top of the music singles charts in the USA and the United Kingdom on September 18th, 1991.

The date is September 18th, 1991 and it's a Wednesday. Anyone born today will have the star sign Virgo. Schools have started back and autumn has arrived, so temperatures have started to cool and trees are beginning to shed their leaves.

George W. Bush Snr. is currently the President of the United States and the movie Dead Again is at the top of the Box Office. In the United Kingdom, John Major is the current Prime Minister. Texting is not a thing yet. Instead, people are using landline phones and pagers. Furthermore, the vast majority of people still have no idea what "the Internet" is.

A rock subgenre called "Grunge" is starting to rise in popularity. In Europe, the Soviet Union is continuing to dissolve. Nirvana have just released their single "Smells Like Teen Spirit".

Rock band Guns N' Roses have just released their albums "Use Your Illusion I" and "Use Your Illusion II". Meanwhile, a new sitcom called "Home Improvement", starring Tim Allen, has just been aired for the first time. A new operating system call Linux has been released on the Internet. If you were to travel back to this day, notable figures such as Miles Davis, Freddie Mercury, Robert Reed and Anthony Perkins would all be still alive. On TV, people are watching popular shows such as "Knots Landing", "The Golden Girls", "Quantum Leap" and "The Ren & Stimpy Show".

Meanwhile, gamers are playing titles such as "SimCity", "Golden Axe", "Castle of Illusion Starring Mickey Mouse" and "Battletoads". Kids and teenagers are watching TV shows such as "Garfield and Friends", "Blossom", "Rosie and Jim" and "Doug". Popular toys at the moment include the likes of the Easy-Bake Oven, the Ghostbusters Proton Pack, Polly Pocket and Lego Pirates.

If you are looking for some childhood nostalgia, then check out September 18th, 1997 instead.

Soccer player.
Born on September 18th, 1998
He was born exactly 7 years after this date.

George W. Bush Snr. was the President of the United States on September 18th, 1991.

John Major was the Prime Minister of the United Kingdom on September 18th, 1991.

Enter your date of birth below to find out how old you were on September 18th, 1991.

Here are some fun statistics about September 18th, 1991.