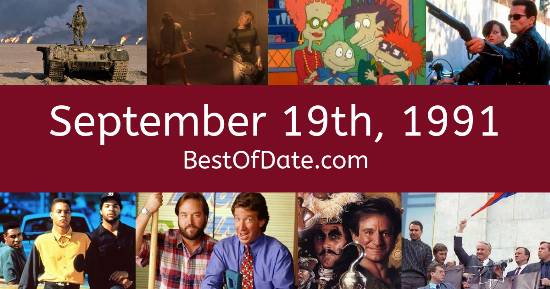 Songs that were on top of the music singles charts in the USA and the United Kingdom on September 19th, 1991:

The date is September 19th, 1991 and it's a Thursday. Anyone born today will have the star sign Virgo. Schools have started back and autumn has arrived, so temperatures have started to cool and trees are beginning to shed their leaves.

George W. Bush Snr. is currently the President of the United States and the movie Dead Again is at the top of the Box Office. In the United Kingdom, John Major is the current Prime Minister. In fashion, many of the trends from the late 80s are still popular. Colored tights, denim overalls, leotards, flannel shirts and shoulder pads are all fashionable at the moment.

In Europe, the Soviet Union is continuing to dissolve. Nirvana have just released their single "Smells Like Teen Spirit". Rock band Guns N' Roses have just released their albums "Use Your Illusion I" and "Use Your Illusion II". Meanwhile, a new sitcom called "Home Improvement", starring Tim Allen, has just been aired for the first time. A new operating system call Linux has been released on the Internet.

In the Alps, a naturally-preserved mummy called "Otzi the Iceman" has just been discovered by two German tourists. On TV, people are watching popular shows such as "Full House", "Blossom", "The Ren & Stimpy Show" and "Rugrats". Meanwhile, gamers are playing titles such as "SimCity", "Castle of Illusion Starring Mickey Mouse", "Battletoads" and "Streets of Rage".

Children and teenagers are currently watching television shows such as "The Wonder Years", "Saved by the Bell", "The Adventures of Pete & Pete" and "Dinosaurs". If you're a kid or a teenager, then you're probably playing with toys such as "Easy-Bake Oven", "Game Boy", "Sega Genesis / Mega Drive" and "Yo-yo".

Celebrities, historical figures and noteable people who were born on the 19th of September:

Who was the Prime Minister of the United Kingdom on September 19th, 1991?

Enter your date of birth below to find out how old you were on September 19th, 1991.

Looking for some nostalgia? Here are some Youtube videos relating to September 19th, 1991. Please note that videos are automatically selected by Youtube and that results may vary! Click on the "Load Next Video" button to view the next video in the search playlist. In many cases, you'll find episodes of old TV shows, documentaries, music videos and soap dramas.

Here are some fun statistics about September 19th, 1991.