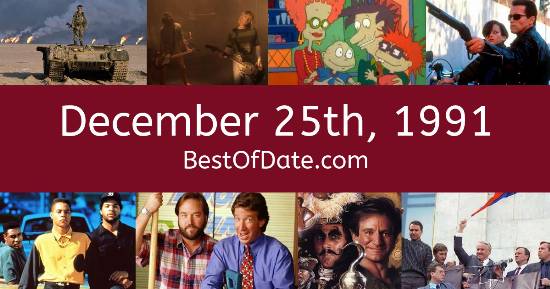 Songs that were on top of the music singles charts in the USA and the United Kingdom on December 25th, 1991.

The movie "Star Trek VI: The Undiscovered Country" was at the top of the box office on December 25th, 1991.

The date is December 25th, 1991 and it's a Wednesday. Anyone born today will have the star sign Capricorn. It's Christmas Day of 1991, so most people are exchanging presents and spending time at home with their families.

In America, the song Black Or White by Michael Jackson is on top of the singles charts. Over in the UK, Bohemian Rhapsody / These Are The Days Of Our Lives by Queen is the number one hit song. George W. Bush Snr. is currently the President of the United States and the movie Star Trek VI: The Undiscovered Country is at the top of the Box Office.

It's 1991, so the airwaves are being dominated by artists such as Bryan Adams, Michael Jackson, Roxette, R.E.M., Color Me Badd and Paula Abdul. A rock subgenre called "Grunge" is starting to rise in popularity. In soccer, French striker Jean-Pierre Papin has won the 1991 Ballon d'Or.

In Europe, the Soviet Union is coming to an end. The leaders of Russia, Belarus and Ukraine have agreed to dissolve the union. Meanwhile, Mikhail Gorbachev has been left with no other choice but to resign as the president of the Soviet Union. On TV, people are watching popular shows such as "The Cosby Show", "The Wonder Years", "One Foot in the Grave" and "Dinosaurs". Meanwhile, gamers are playing titles such as "SimCity", "The Legend of Zelda: A Link to the Past", "Super Castlevania IV" and "Civilization".

Kids and teenagers are watching TV shows such as "Thomas the Tank Engine", "Full House", "The Wonder Years" and "Rugrats". If you're a kid or a teenager, then you're probably playing with toys such as Teenage Mutant Hero Turtles figures, the Game Boy, Yo-yo and G.I. Joe (figures).

If you are looking for some childhood nostalgia, then check out December 25th, 1997 instead.

Model.
Born on December 25th, 1999
She was born exactly 8 years after this date.

George W. Bush Snr. was the President of the United States on December 25th, 1991.

John Major was the Prime Minister of the United Kingdom on December 25th, 1991.

Enter your date of birth below to find out how old you were on December 25th, 1991.

Here are some fun statistics about December 25th, 1991.