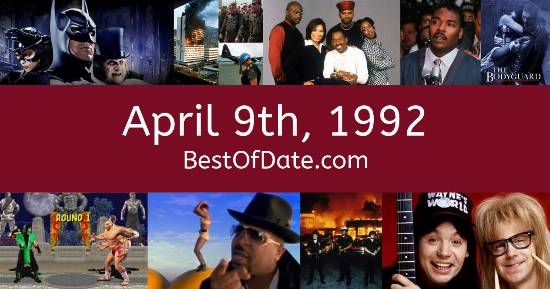 These songs were on top of the music charts in the United States and the United Kingdom on April 9th, 1992.

The date is April 9th, 1992, and it's a Thursday. Anyone born today will have the star sign Aries. The summer of 1992 is drawing closer and temperatures have started to rise.

In America, the song Save The Best For The Last by Vanessa Williams is on top of the singles charts. Over in the UK, Stay by Shakespears Sisters is the number one hit song. George W. Bush Snr. is currently the President of the United States, and the movie White Men Can't Jump is at the top of the Box Office.

It's 1992, so radio stations are being dominated by the likes of Kris Kross, Boyz II Men, Whitney Houston, Sir Mix-a-Lot, Right Said Fred, Snap! and Nirvana. The trial of four police officers for the 1991 beating of Rodney King back is currently taking in Simi Valley, California. Boxer Mike Tyson has just been sentenced to six years in prison for the rape of 18-year-old Desiree Washington in Indiana.

German dance group "Snap!" have just released their new single "Rhythm Is a Dancer". In fashion, many of the trends from the late 80s are still in vogue. Colored tights, denim overalls, leotards, flannel shirts and shoulder pads are all fashionable at the moment. Grunge fashion has also become mainstream, popularizing band t-shirts, ripped jeans, mom jeans and Doc Martens. Meanwhile, Gambino crime family boss John Gotti has recently been sentenced to life in prison for murder and racketeering.

A new comedy film called "Beethoven" has just been released in movie theaters. In wrestling, WrestleMania VIII has taken place at the Hoosier Dome in Indianapolis, Indiana. Randy Savage has defeated Ric Flair and Hulk Hogan has beaten Sid Justice. The fight has been billed as Hogan's last match. In Washington, D.C., 500,000 people have recently taken to the streets in support of abortion rights.

In television, a new American news show called "Dateline NBC" has been aired for the first time. Meanwhile, a new children's TV series called "Barney & Friends" has also made its debut. A war has broken out in Bosnia and Herzegovina following the shelling of Sarajevo by Serb forces. In Miami, former Panama leader Manuel Noriega has just been found guilty of colluding with Colombia's cocaine cartel.

In the United Kingdom, it is voting day in the 1992 general election. Prime Minister John Major and the Conservative Party are hoping to retain power. However, recent opinion polls have been consistently favoring the Labour Party, who are being led by Neil Kinnock. If you were to travel back to this day, notable figures such as Robert Reed, Anthony Perkins, Audrey Hepburn and Thurgood Marshall would all be still alive. On TV, people are watching popular shows such as "Only Fools and Horses", "'Allo 'Allo!", "The Golden Girls" and "Roseanne".

Meanwhile, gamers are playing titles such as "Battletoads", "F-16 Combat Pilot", "Civilization" and "Street Fighter II: The World Warrior". Children and teenagers are currently watching television shows such as "Adventures of the Little Koala", "Noozles", "The Adventures of Pete & Pete" and "Barney & Friends". If you're a kid or a teenager, then you're probably playing with toys such as the Easy-Bake Oven, Micro Machines, Koosh Ball and G.I. Joe (figures).

These are trending news stories and fads that were prevalent at this time. These are topics that would have been in the media on April 9th, 1992.

News stories, pop culture trends, and other events that happened around April 9th, 1992.

Check out our personality summary for people who were born on April 9th, 1992.

If you are looking for some childhood nostalgia, then you should check out April 9th, 1998, instead.

Celebrities, historical figures, and other notable people who were born on April 9th.

George W. Bush Snr. was the President of the United States on April 9th, 1992.

Find out what your age was on April 9th, 1992, by entering your DOB below.
This information is not saved on our server.

Here are some fun statistics about April 9th, 1992.