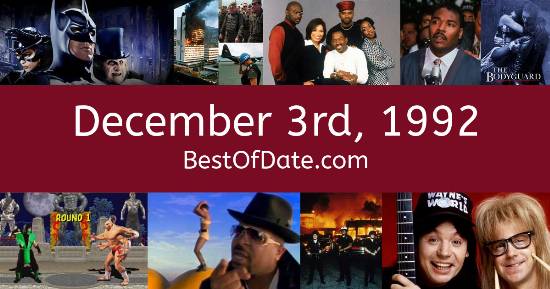 Songs that were on top of the music singles charts in the USA and the United Kingdom on December 3rd, 1992.

The movie "Bram Stoker's Dracula" was at the top of the box office on December 3rd, 1992.

The date is December 3rd, 1992 and it's a Thursday. Anyone born today will have the star sign Sagittarius. The song I Will Always Love You by Whitney Houston is on top of the singles charts in both the USA and the United Kingdom.

In Europe, a war is continuing to rage on in Bosnia and Herzegovina. Disney's "Aladdin" and "The Bodyguard", starring Whitney Houston and Kevin Costner, have both been released in movie theaters. Meanwhile, the film "Home Alone 2: Lost in New York" is also showing on the big screen. In soccer, French striker Eric Cantona has joined Manchester United from Leeds in a transfer that is worth £1.2 million.

If you were to travel back to this day, notable figures such as Audrey Hepburn, Thurgood Marshall, Andre the Giant and Bobby Moore would all be still alive. On TV, people are watching popular shows such as "Sherlock Holmes", "Married... with Children", "One Foot in the Grave" and "Baywatch". Meanwhile, gamers are playing titles such as "Duck Hunt", "Paperboy", "The Simpsons: Bart vs. the Space Mutants" and "Kirby's Dream Land".

Kids and teenagers are watching TV shows such as "Fireman Sam", "The Adventures of Tintin", "The Little Mermaid" and "Hangin' with Mr. Cooper". Popular toys at the moment include the likes of My Little Pony (figures), Yo-yo, the Super Nintendo Entertainment System (SNES) and the Talkboy.

If you are looking for some childhood nostalgia, then check out December 3rd, 1998 instead.

Rapper.
Born on December 3rd, 1994
He was born exactly 2 years after this date.

George W. Bush Snr. was the President of the United States on December 3rd, 1992.

John Major was the Prime Minister of the United Kingdom on December 3rd, 1992.

Enter your date of birth below to find out how old you were on December 3rd, 1992.

Here are some fun statistics about December 3rd, 1992.

Have something to say about December 3rd, 1992?