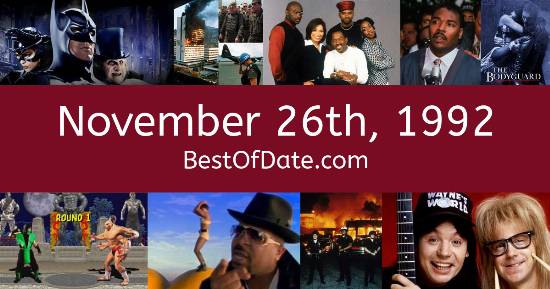 Songs that were on top of the music singles charts in the USA and the United Kingdom on November 26th, 1992.

The movie "Bram Stoker's Dracula" was at the top of the box office on November 26th, 1992.

The date is November 26th, 1992 and it's a Thursday. Anyone born today will have the star sign Sagittarius. In America, families are currently celebrating Thanksgiven Day.

In Europe, a war is continuing to rage on in Bosnia and Herzegovina. In music, singer Whitney Houston has recently released her new soundtrack album "The Bodyguard". The album contains songs such as "I Will Always Love You" and "I'm Every Woman". Disney's "Aladdin" and "The Bodyguard", starring Whitney Houston and Kevin Costner, have both been released in movie theaters. Meanwhile, the film "Home Alone 2: Lost in New York" is also showing on the big screen.

In Europe, the Federal Assembly in Czechoslovakia has recently voted to split the country into the Czech Republic and Slovakia. The change will take effect on the 1st of January of next year. In soccer, French striker Eric Cantona has joined Manchester United from Leeds in a transfer that is worth £1.2 million. If you were to travel back to this day, notable figures such as Audrey Hepburn, Thurgood Marshall, Andre the Giant and Bobby Moore would all be still alive.

On TV, people are watching popular shows such as "Only Fools and Horses", "Murder, She Wrote", "Dinosaurs" and "Melrose Place". Meanwhile, gamers are playing titles such as "F-Zero", "Desert Strike ", "Street Fighter II: The World Warrior" and "Wolfenstein 3D". Children and teenagers are currently watching television shows such as "Mr. Bean", "In Living Color", "Beverly Hills, 90210" and "Home Improvement".

Popular toys at the moment include the likes of Jenga, Nerf Blaster, Teen Talk Barbie and Littlest Pet Shop.

If you are looking for some childhood nostalgia, then check out November 26th, 1998 instead.

National holidays and famous events that fall on the 26th of November.

George W. Bush Snr. was the President of the United States on November 26th, 1992.

John Major was the Prime Minister of the United Kingdom on November 26th, 1992.

Enter your date of birth below to find out how old you were on November 26th, 1992.

Here are some fun statistics about November 26th, 1992.