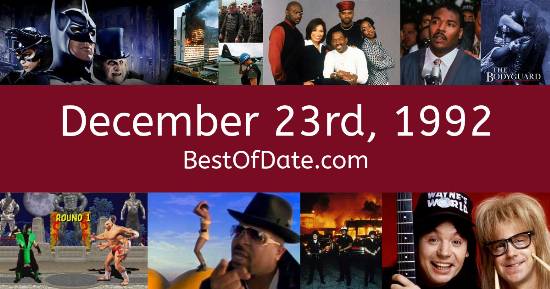 Songs that were on top of the music singles charts in the USA and the United Kingdom on December 23rd, 1992.

The date is December 23rd, 1992 and it's a Wednesday. Anyone born today will have the star sign Capricorn. Christmas Day of 1992 is fast approaching and the excitement is building. Department stores are thronged with Christmas shoppers.

Former N.W.A rapper Dr. Dre has just released his debut solo album "The Chronic". The album contains songs such as "Nuthin' but a 'G' Thang". In soccer, Dutch striker Marco van Basten has recently won the 1992 Ballon d'Or. van Basten beat out contenders such as Hristo Stoichkov and Dennis Bergkamp. The film "Scent of a Woman", starring Al Pacino, has just been released in movie theaters.

If you were to travel back to this day, notable figures such as Audrey Hepburn, Thurgood Marshall, Andre the Giant and Bobby Moore would all be still alive. On TV, people are watching popular shows such as "Knots Landing", "Matlock", "The Wonder Years" and "Baywatch". Meanwhile, gamers are playing titles such as "Duck Hunt", "Wolfenstein 3D", "Yoshi" and "Super Mario Land 2: 6 Golden Coins".

Children and teenagers are currently watching television shows such as "The Care Bears", "Full House", "Dinosaurs" and "Rugrats". Popular toys at the moment include the likes of Screwball Scramble, the Ghostbusters Proton Pack, the Super Nintendo Entertainment System (SNES) and Mighty Max.

If you are looking for some childhood nostalgia, then check out December 23rd, 1998 instead.

George W. Bush Snr. was the President of the United States on December 23rd, 1992.

John Major was the Prime Minister of the United Kingdom on December 23rd, 1992.

Enter your date of birth below to find out how old you were on December 23rd, 1992.

Here are some fun statistics about December 23rd, 1992.