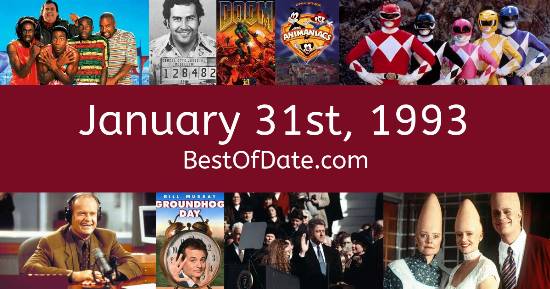 On January 31st, 1993, the following songs were at the top of the music charts in the USA and the UK.

The top "Box Office" movie on this date was the film "Aladdin".

The date is January 31st, 1993, and it's a Sunday. Anyone born today will have the star sign Aquarius. Currently, people are enjoying their weekend.

The song I Will Always Love You by Whitney Houston is on top of the singles charts in both the USA and the United Kingdom. Bill Clinton is currently the President of the United States, and the movie Aladdin is at the top of the Box Office. In the United Kingdom, John Major is the current Prime Minister.

It's 1993, so radio stations are being dominated by the likes of Meat Loaf, UB40, Snow, Haddaway, Whitney Houston, Take That, Janet Jackson and Mariah Carey. In US politics, Bill Clinton has recently been inaugurated as the 42nd President of the United States. Wrestling fans are mourning the death of Andre the Giant, who recently passed away from congested heart failure at the age of 46.

The Dallas Cowboys have just won Super Bowl XXVII after beating the Buffalo Bills by 52-17 at the Rose Bowl in Pasadena, California. This is the third year in a row that the Buffalo Bills have lost the Super Bowl. Pop star Michael Jackson performed at the halftime show. If you were to travel back to this day, notable figures such as Bobby Moore, Brandon Lee, Conway Twitty and Dražen Petrović would all be still alive. On TV, people are watching popular shows such as "Knots Landing", "Full House", "Star Trek: The Next Generation" and "Mad About You".

Meanwhile, gamers are playing titles such as "Teenage Mutant Ninja Turtles III: The Manhattan Project", "The Legend of Zelda: A Link to the Past", "Yoshi" and "Super Star Wars". Kids and teenagers are watching TV shows such as "Fireman Sam", "Saved by the Bell", "The Simpsons" and "Clarissa Explains It All". Popular toys at the moment include the likes of Pogo ball / Lolo ball, Micro Machines, Teen Talk Barbie and the Talkboy.

These are trending news stories and fads that were prevalent at this time. These are topics that would have been in the media on January 31st, 1993.

News stories and other events that happened around January 31st, 1993.

Check out our personality summary for people who were born on January 31st, 1993.

If you are looking for some childhood nostalgia, then you should check out January 31st, 1999 instead.

TikTok user.
Born on January 31st, 2002
He was born exactly 9 years after this date.

Bill Clinton was the President of the United States on January 31st, 1993.

John Major was the Prime Minister of the United Kingdom on January 31st, 1993.

Find out what your age was on January 31st, 1993, by entering your DOB below.
This information is not saved on our server.

Here are some fun statistics about January 31st, 1993.