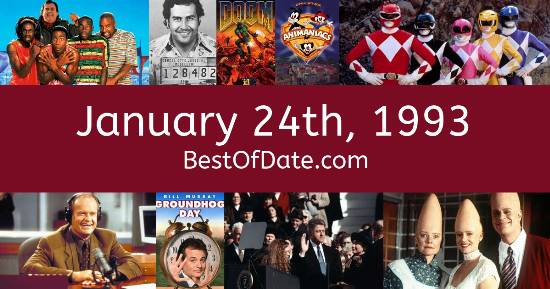 On January 24th, 1993, the following songs were at the top of the music charts in the USA and the UK.

The top "Box Office" movie on this date was the film "A Few Good Men".

The date is January 24th, 1993, and it's a Sunday. Anyone born today will have the star sign Aquarius. Currently, people are enjoying their weekend.

The song I Will Always Love You by Whitney Houston is on top of the singles charts in both the USA and the United Kingdom. Bill Clinton is currently the President of the United States, and the movie A Few Good Men is at the top of the Box Office. In the United Kingdom, John Major is the current Prime Minister.

It's 1993, so radio stations are being dominated by the likes of Meat Loaf, UB40, Snow, Haddaway, Whitney Houston, Take That, Janet Jackson and Mariah Carey. A new survival drama film called "Alive" has just been released in movie theaters. The movie tells the story about the Uruguayan rugby team's plane crash in the Andes in 1972. Technology company IBM has just announced a massive $8 billion USD loss for 1992.

In the Middle East, US forces have fired cruise missiles at a number of factories in Baghdad, Iraq. The factories are believed to be linked to an illegal nuclear weapons program. Tributes are pouring in for actress Audrey Hepburn, who recently passed away at the age of 63 after a short battle with abdominal cancer. In US politics, Bill Clinton has recently been inaugurated as the 42nd President of the United States.

If you were to travel back to this day, notable figures such as Thurgood Marshall, Andre the Giant, Bobby Moore and Brandon Lee would all be still alive. On TV, people are watching popular shows such as "Knots Landing", "The Wonder Years", "Baywatch" and "Martin". Meanwhile, gamers are playing titles such as "Street Fighter II: The World Warrior", "Night Trap", "Super Star Wars" and "Sonic the Hedgehog 2".

Children and teenagers are currently watching television shows such as "Doogie Howser, M.D.", "Blossom", "Rosie and Jim" and "Taz-Mania". If you're a kid or a teenager, then you're probably playing with toys such as Screwball Scramble, Micro Machines, Yo-yo and Teen Talk Barbie.

These are trending news stories and fads that were prevalent at this time. These are topics that would have been in the media on January 24th, 1993.

Check out our personality summary for people who were born on January 24th, 1993.

If you are looking for some childhood nostalgia, then you should check out January 24th, 1999, instead.

Bill Clinton was the President of the United States on January 24th, 1993.

Enter your date of birth below to find out how old you were on January 24th, 1993.
This information is not transmitted to our server.

Here are some fun statistics about January 24th, 1993.