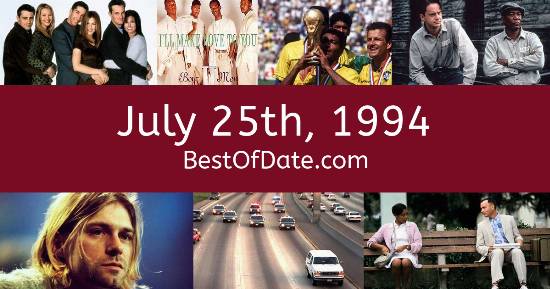 On July 25th, 1994, the following songs were at the top of the music charts in the USA and the UK.

The top "Box Office" movie on this date was the film "Forrest Gump".

The date is July 25th, 1994, and it's a Monday. Anyone born today will have the star sign Leo. It's summer, so the temperatures are warmer and the evenings are longer than usual.

In America, the song I Swear by All-4-One is on top of the singles charts. Over in the UK, Love Is All Around by Wet Wet Wet is the number one hit song. Bill Clinton is currently the President of the United States, and the movie Forrest Gump is at the top of the Box Office.

In Europe, a war is continuing to rage on in Bosnia and Herzegovina. In Argentina, a recent suicide bomb attack on the Argentine Israelite Mutual Association building in Buenos Aires has left 85 people dead. On TV, the final episode of the series "Dinosaurs" has been aired.

In the United Kingdom, Tony Blair has become the new leader of the Labour Party after defeating John Prescott and Margaret Beckett in the recent leadership elections. If you were to travel back to this day, notable figures such as Raul Julia, Eazy E, Selena and Bob Ross would all be still alive. On TV, people are watching popular shows such as "Last of the Summer Wine", "Step by Step", "The X-Files" and "Frasier".

Meanwhile, gamers are playing titles such as "Myst", "Sonic Spinball", "Tetris 2" and "Mario's Time Machine". Kids and teenagers are watching TV shows such as "Rosie and Jim", "Tales from the Cryptkeeper", "Boy Meets World" and "The Nanny". Popular toys at the moment include the likes of Pogo ball / Lolo ball, Micro Machines, the Game Boy and Littlest Pet Shop.

These are trending news stories and fads that were prevalent at this time. These are topics that would have been in the media on July 25th, 1994.

News stories and other events that happened around July 25th, 1994.

Check out our personality summary for people who were born on July 25th, 1994.

Television shows that people were watching in July, 1994.

Popular video games that people were playing in July of 1994.

If you are looking for some childhood nostalgia, then you should check out July 25th, 2000 instead.

Bill Clinton was the President of the United States on July 25th, 1994.

John Major was the Prime Minister of the United Kingdom on July 25th, 1994.

Find out what your age was on July 25th, 1994, by entering your DOB below.
This information is not saved on our server.