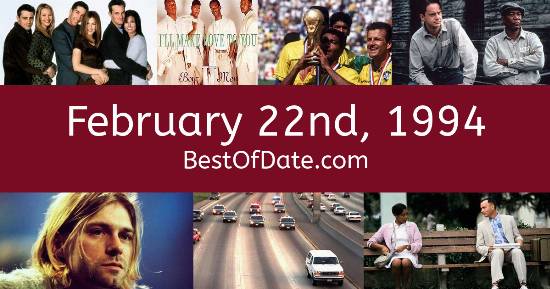 Songs that were on top of the music singles charts in the USA and the United Kingdom on February 22nd, 1994.

The date is February 22nd, 1994 and it's a Tuesday. Anyone born today will have the star sign Pisces. In America, the song The Power Of Love by Celine Dion is on top of the singles charts.

In Europe, a war is continuing to rage on in Bosnia and Herzegovina. If you were to travel back to this day, notable figures such as Bill Hicks, John Candy, Kurt Cobain and Richard Nixon would all be still alive. On TV, people are watching popular shows such as "Only Fools and Horses", "Step by Step", "Martin" and "The X-Files".

Meanwhile, gamers are playing titles such as "Mortal Kombat", "Syndicate", "Myst" and "Mario's Time Machine". Children and teenagers are currently watching television shows such as "Blossom", "Rosie and Jim", "Dinosaurs" and "Hangin' with Mr. Cooper". If you're a kid or a teenager, then you're probably playing with toys such as the Sega Genesis / Mega Drive, Lego Pirates, Littlest Pet Shop and Mighty Max.

If you are looking for some childhood nostalgia, then check out February 22nd, 2000 instead.

Bill Clinton was the President of the United States on February 22nd, 1994.

John Major was the Prime Minister of the United Kingdom on February 22nd, 1994.

Enter your date of birth below to find out how old you were on February 22nd, 1994.

Here are some fun statistics about February 22nd, 1994.