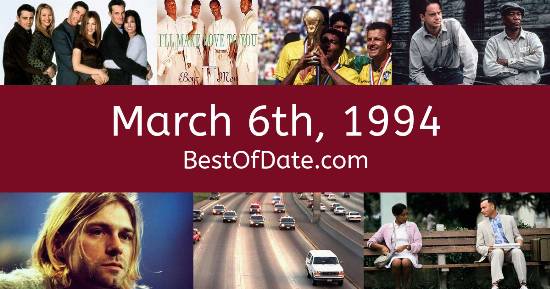 These songs were on top of the music charts in the United States and the United Kingdom on March 6th, 1994.

The movie "Ace Ventura: Pet Detective" was at the top of the Box Office on March 6th, 1994.

The date is March 6th, 1994, and it's a Sunday. Anyone born today will have the star sign Pisces. Currently, people are enjoying their weekend.

Bill Clinton is currently the President of the United States, and the movie Ace Ventura: Pet Detective is at the top of the Box Office. In the United Kingdom, John Major is the current Prime Minister. Meanwhile, in technology news, a relatively new storage format called the CD is beginning to outpace the regular cassette tape in music sales. The disc-based format gives listeners the ability to skip between songs instead of having to manually rewind and forward.

It's 1994, so radio stations are being dominated by the likes of All-4-One, Boyz II Men, R. Kelly, Céline Dion, Bruce Springsteen, Bryan Adams, Meat Loaf, Bon Jovi, Wet Wet Wet, Rednex and Mariah Carey. In Europe, a war is continuing to rage on in Bosnia and Herzegovina. In Gloucester, England, suspected serial killer Fred West and his wife have been arrested by police. The arrests follow recent excavations at their home in Wests' Cromwell Street.

US troops have withdrawn from Somalia earlier than expected. Initially, the deadline had been set for March 31st. People are currently shocked by the death of actor John Candy, who recently died from a heart attack while vacationing in Durango, Mexico. Candy was only 43 years old and had been filming for the Western parody film "Wagons East". Meanwhile, in Florida, anti-abortionist Michael Griffin has been found guilty of last year's murder of American physician Dr. David Gunn.

The media is reporting that Nirvana front man Kurt Cobain has woken from his coma and is now on the path to recovery. Their had been fears for Cobain's life after he overdosed on Rohypnol and champagne in Rome, Italy, at the start of this month. If you were to travel back to this day, notable figures such as Kurt Cobain, Richard Nixon, Nicole Brown Simpson and Andrés Escobar would all be still alive. On TV, people are watching popular shows such as "Dinosaurs", "Mad About You", "Lois & Clark: The New Adventures of Superman" and "Frasier".

Meanwhile, gamers are playing titles such as "Mortal Kombat II", "Myst", "NBA Jam" and "Jungle Strike". Kids and teenagers are watching TV shows such as "In Living Color", "Rosie and Jim", "Dinosaurs" and "Boy Meets World". If you're a kid or a teenager, then you're probably playing with toys such as Polly Pocket, Yo-yo, Nerf Blaster and Littlest Pet Shop.

These are trending news stories and fads that were prevalent at this time. These are topics that would have been in the media on March 6th, 1994.

Check out our personality summary for people who were born on March 6th, 1994.

Television shows that people were watching in March, 1994.

Popular video games that people were playing in March of 1994.

If you are looking for some childhood nostalgia, then you should check out March 6th, 2000 instead.

Soccer player.
Born on March 6th, 1996
He was born exactly 2 years after this date.

Bill Clinton was the President of the United States on March 6th, 1994.

Enter your date of birth below to find out how old you were on March 6th, 1994.
This information is not transmitted to our server.

Here are some fun statistics about March 6th, 1994.