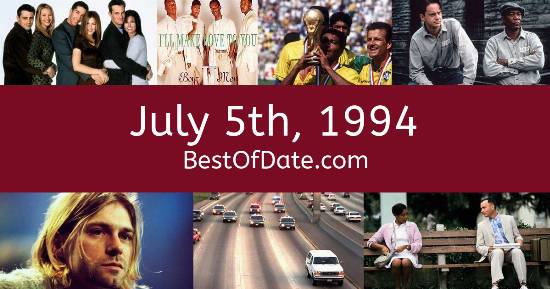 Songs that were on top of the music singles charts in the USA and the United Kingdom on July 5th, 1994:

The date is July 5th, 1994 and it's a Tuesday. Anyone born today will have the star sign Cancer. The 4th of July celebrations in America have come and passed.

Bill Clinton is currently the President of the United States and the movie Lion King is at the top of the Box Office. In the United Kingdom, John Major is the current Prime Minister. In fashion, "grunge" clothing has declined in popularity and women are beginning to wear form-fitting outfits such as slip dresses and pencil skirts. Movies such as Clueless and The Craft have popularized the "sexy school girl" look.

In the United States, the 1994 FIFA World Cup is being held. In Japan, 8 people have lost their lives following a sarin gas attack by the Aum Shinrikyo doomsday cult. The attack took place in a quiet neighborhood in Matsumoto, Nagano. American figure skater Tonya Harding has recently been banned for life from the sport. The ban has come as a result of her involvement in an attack on rival skater Nancy Kerrigan back in January.

In a tragic turn of events, Colombian defender Andrés Escobar has been shot dead in Medellín. Escobar's murder is believed to be revenge for the own goal that he scored against the United States in the 1994 FIFA World Cup. In celebrity news, actor Liam Neeson and actress Natasha Richardson have been married in New York. A new online bookstore called "Amazon" has just been launched by Jeff Bezos in Seattle.

People are watching popular TV shows such as "Last of the Summer Wine", "Full House", "One Foot in the Grave" and "Martin". Meanwhile, gamers are playing titles such as "Shinobi III: Return of the Ninja Master", "Myst", "Doom" and "Super Metroid". Children and teenagers are currently watching television shows such as "Mister Rogers' Neighborhood", "The Simpsons", "Batman: The Animated Series" and "Bill Nye the Science Guy".

If you're a kid or a teenager, then you're probably playing with toys such as "Transformers", "Polly Pocket", "G.I. Joe (figures)" and "Action Man".

Celebrities and historical figures that were born on the 5th of July:

Who was the Prime Minister of the United Kingdom on July 5th, 1994?

Enter your date of birth below to find out how old you were on July 5th, 1994.

Looking for some nostalgia? Here are some Youtube videos relating to July 5th, 1994. Please note that videos are automatically selected by Youtube and that results may vary! Click on the "Load Next Video" button to view the next video in the search playlist. In many cases, you'll find episodes of old TV shows, documentaries, music videos and soap dramas.

Here are some fun statistics about July 5th, 1994.