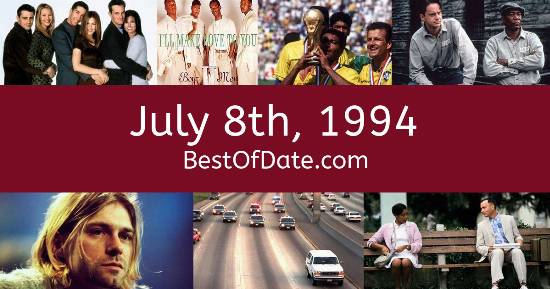 Songs that were on top of the music singles charts in the USA and the United Kingdom on July 8th, 1994.

The date is July 8th, 1994 and it's a Friday. Anyone born today will have the star sign Cancer. Currently, people have "that Friday feeling" and are looking forward to the weekend.

On the continent of Africa, a horrible event is unfolding, as the Hutu majority in Rwanda attempt to wipe out the Tutsi minority. This genocide began following the assassination of President Juvenal Habyarimana. In the United States, the 1994 FIFA World Cup is being held. American figure skater Tonya Harding has recently been banned for life from the sport. The ban has come as a result of her involvement in an attack on rival skater Nancy Kerrigan back in January.

In a tragic turn of events, Colombian defender Andrés Escobar has been shot dead in Medellín. Escobar's murder is believed to be revenge for the own goal that he scored against the United States in the 1994 FIFA World Cup. In celebrity news, actor Liam Neeson and actress Natasha Richardson have been married in New York. A new online bookstore called "Amazon" has just been launched by Jeff Bezos in Seattle.

In North Korea, "Supreme Leader" Kim Il-sung has passed away at the age of 82. Il-sung, who has lead the country since it was founded, is believed to have died from a heart attack. On TV, people are watching popular shows such as "Roseanne", "Dinosaurs", "Batman: The Animated Series" and "Dr. Quinn, Medicine Woman". Meanwhile, gamers are playing titles such as "Shinobi III: Return of the Ninja Master", "Gunstar Heroes", "Myst" and "Super Metroid".

Children and teenagers are currently watching television shows such as "Are You Afraid of the Dark?", "Dinosaurs", "The Ren & Stimpy Show" and "Taz-Mania". If you're a kid or a teenager, then you're probably playing with toys such as the Easy-Bake Oven, Micro Machines, Polly Pocket and Littlest Pet Shop.

If you are looking for some childhood nostalgia, then check out July 8th, 2000 instead.

Celebrities, historical figures and notable people who were born on the 8th of July.

Bill Clinton was the President of the United States on July 8th, 1994.

John Major was the Prime Minister of the United Kingdom on July 8th, 1994.

Enter your date of birth below to find out how old you were on July 8th, 1994.

Here are some fun statistics about July 8th, 1994.