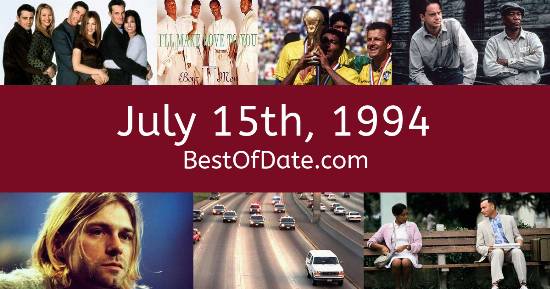 Songs that were on top of the music singles charts in the USA and the United Kingdom on July 15th, 1994.

The date is July 15th, 1994 and it's a Friday. Anyone born today will have the star sign Cancer. Currently, people have "that Friday feeling" and are looking forward to the weekend.

Bill Clinton is currently the President of the United States and the movie True Lies is at the top of the Box Office. In the United Kingdom, John Major is the current Prime Minister. Meanwhile, in technology news, a relatively new storage format called the CD is beginning to outpace the regular cassette tape in music sales. The disc-based format gives listeners the ability to skip between songs instead of having to manually rewind and forward.

On the continent of Africa, a horrible event is unfolding, as the Hutu majority in Rwanda attempt to wipe out the Tutsi minority. This genocide began following the assassination of President Juvenal Habyarimana. In the United States, the 1994 FIFA World Cup is being held. In North Korea, "Supreme Leader" Kim Il-sung has passed away at the age of 82. Il-sung, who has lead the country since it was founded, is believed to have died from a heart attack.

In Germany, the last allied forces have left the country. This marks the final end of Germany's occupation, which began in 1945. On TV, people are watching popular shows such as "Married... with Children", "Beverly Hills, 90210", "Clarissa Explains It All" and "Home Improvement". Meanwhile, gamers are playing titles such as "Myst", "NBA Jam", "Disney's Aladdin" and "Super Metroid".

Children and teenagers are currently watching television shows such as "Blossom", "Rosie and Jim", "Living Single" and "Bill Nye the Science Guy". If you're a kid or a teenager, then you're probably playing with toys such as Transformers, the Game Boy, Super Soaker (water gun) and Mighty Max.

If you are looking for some childhood nostalgia, then check out July 15th, 2000 instead.

Bill Clinton was the President of the United States on July 15th, 1994.

John Major was the Prime Minister of the United Kingdom on July 15th, 1994.