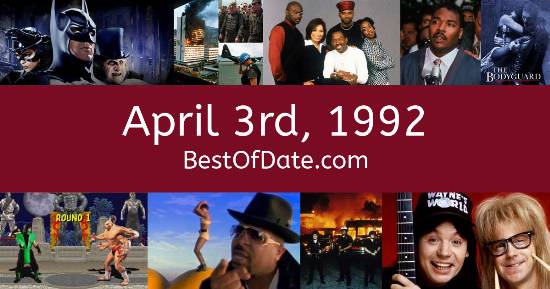 Songs that were on top of the music singles charts in the USA and the United Kingdom on April 3rd, 1992.

The date is April 3rd, 1992, and it's a Friday. Anyone born today will have the star sign Aries. Currently, people have "that Friday feeling" and are looking forward to the weekend.

George W. Bush Snr. is currently the President of the United States, and the movie White Men Can't Jump is at the top of the Box Office. In the United Kingdom, John Major is the current Prime Minister. Texting is not a thing yet. Instead, people are using landline phones and pagers. Furthermore, the vast majority of people still have no idea what "the Internet" is.

In the United Kingdom, the campaign for the 1992 general election is underway. Prime Minister John Major and the Conservative Party are hoping to retain power. However, recent polls have been consistently favoring the Labour Party, who are being led by Neil Kinnock. Boxer Mike Tyson has just been sentenced to six years in prison for the rape of 18-year-old Desiree Washington in Indiana. German dance group "Snap!" have just released their new single "Rhythm Is a Dancer".

The 64th Academy Awards have just been held in Los Angeles. The Silence of the Lambs (1991) has won "Best Picture", while Anthony Hopkins and Jodie Foster have both won Oscars for their acting performances in the movie. In television, a new American news show called "Dateline NBC" has been aired for the first time. In fashion, many of the trends from the late 80s are still in vogue. Colored tights, denim overalls, leotards, flannel shirts and shoulder pads are all fashionable at the moment. Grunge fashion has also become mainstream, popularizing band t-shirts, ripped jeans, mom jeans and Doc Martens.

In music news, English singer Billy Idol has pleaded no contest to charges that he punched a woman in the face. Meanwhile, Gambino crime family boss John Gotti has recently been sentenced to life in prison for murder and racketeering. A new comedy film called "Beethoven" has just been released in movie theaters.

If you were to travel back to this day, notable figures such as Robert Reed, Anthony Perkins, Audrey Hepburn and Thurgood Marshall would all be still alive. On TV, people are watching popular shows such as "The Cosby Show", "The Golden Girls", "Step by Step" and "Baywatch". Meanwhile, gamers are playing titles such as "Duck Hunt", "Streets of Rage", "Civilization" and "Street Fighter II: The World Warrior".

Children and teenagers are currently watching television shows such as "Pingu", "Art Attack", "The Adventures of Pete & Pete" and "Doug". If you're a kid or a teenager, then you're probably playing with toys such as Pogo ball / Lolo ball, Micro Machines, Koosh Ball and the Sega Genesis / Mega Drive.

These are trending news stories and fads that were prevalent at this time. These are topics that would have been in the media on April 3rd, 1992.

News stories, pop culture trends, and other events that happened around April 3rd, 1992.

Check out our personality summary for people who were born on April 3rd, 1992.

If you are looking for some childhood nostalgia, then you should check out April 3rd, 1998, instead.

Celebrities, historical figures, and other notable people who were born on April 3rd.

George W. Bush Snr. was the President of the United States on April 3rd, 1992.

Find out what your age was on April 3rd, 1992, by entering your DOB below.
This information is not saved on our server.

Here are some fun statistics about April 3rd, 1992.