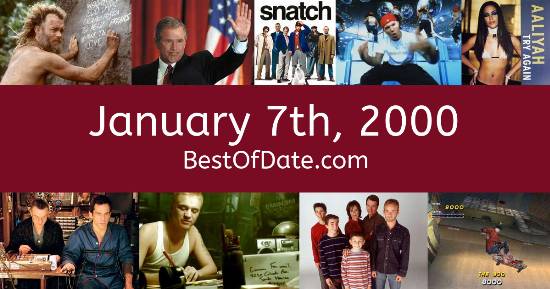 Songs that were on top of the music singles charts in the USA and the United Kingdom on January 7th, 2000.

The movie "Stuart Little" was at the top of the box office on January 7th, 2000.

The date is January 7th, 2000 and it's a Friday. Anyone born today will have the star sign Capricorn. Currently, people have "that Friday feeling" and are looking forward to the weekend.

People are starting to return back to work and school after the Christmas holidays. In America, the song Smooth by Santana & Rob Thomas is on top of the singles charts. Over in the UK, I Have A Dream / Seasons In The Sun by Westlife is the number one hit song.

Bill Clinton is currently the President of the United States and the movie Stuart Little is at the top of the Box Office. In the United Kingdom, Tony Blair is the current Prime Minister. The Nokia 3210 is currently one of the most popular cell phones on the market.

Pokemon has become one of the most popular franchises in the world, as trading cards, toys and handheld games gross over one billion dollars. In celebrity news, Catherine Zeta-Jones and actor Michael Douglas have recently become engaged. It's the year 2000, so the music charts are being dominated by the likes of Christina Aguilera, Faith Hill, Savage Garden, Destiny's Child, Santana, Sisqó, Creed, Aaliyah and Enrique Iglesias.

Bill Clinton was the President of the United States on January 7th, 2000.

Tony Blair was the Prime Minister of the United Kingdom on January 7th, 2000.

Enter your date of birth below to find out how old you were on January 7th, 2000.

Here are some fun statistics about January 7th, 2000.

Leave a comment and tell everyone why January 7th, 2000 is important to you.