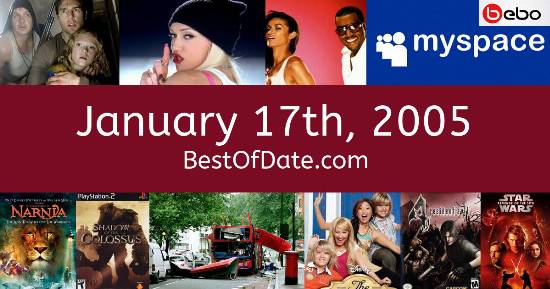 Songs that were on top of the music singles charts in the USA and the United Kingdom on January 17th, 2005.

The date is January 17th, 2005 and it's a Monday. Anyone born today will have the star sign Capricorn. In America, the song Let Me Love You by Mario is on top of the singles charts.

Over in the UK, Jailhouse Rock by Elvis Presley is the number one hit song. George W. Bush Jnr. is currently the President of the United States and the movie Coach Carter is at the top of the Box Office. In the United Kingdom, Tony Blair is the current Prime Minister.

It's 2005, so the music charts are being dominated by the likes of Mariah Carey, Gwen Stefani, Mario, Kelly Clarkson, 50 Cent, Kanye West and Ciara. On TV, people are watching popular shows such as "Fear Factor", "Smallville", "The Apprentice" and "Stargate Atlantis". Meanwhile, gamers are playing titles such as "Killzone", "Halo 2", "Half-Life 2" and "Resident Evil 4".

Children and teenagers are currently watching television shows such as "Ed, Edd n Eddy", "Dora the Explorer", "Malcolm in the Middle" and "LazyTown". Popular toys at the moment include the likes of the PlayStation 2, Yu-Gi-Oh! Trading Card Game, RoboSapien (toy robot) and the Nintendo DS.

George W. Bush Jnr. was the President of the United States on January 17th, 2005.

Tony Blair was the Prime Minister of the United Kingdom on January 17th, 2005.

Enter your date of birth below to find out how old you were on January 17th, 2005.

Here are some fun statistics about January 17th, 2005.

Leave a comment and tell everyone why January 17th, 2005 is important to you.