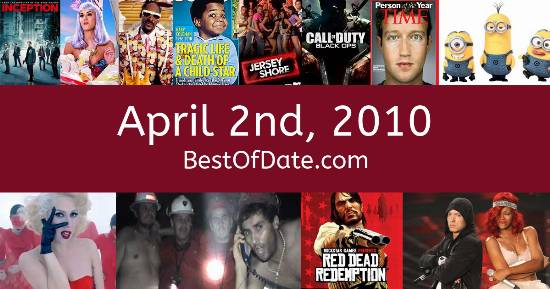 Songs that were on top of the music singles charts in the USA and the United Kingdom on April 2nd, 2010.

The date is April 2nd, 2010 and it's a Friday. Anyone born today will have the star sign Aries. Currently, people have "that Friday feeling" and are looking forward to the weekend.

The summer of 2010 is drawing closer and temperatures have started to rise. In America, the song Rude Boy by Rihanna is on top of the singles charts. Over in the UK, Telephone by Lady GaGa ft Beyonce is the number one hit song.

The slang phrase "Come at me bro" is starting to become popular on the Internet. A South Korean Navy ship carrying 104 personnel has sank off the west coast of South Korea, leaving 46 sailors dead. North Korea are currently being blamed for the sinking. French DJ David Guetta has released a new single called "Memories", featuring rapper Kid Cudi.

Puerto Rican singer Ricky Martin has come out and announced that he is gay. Monster Garage host Jesse James has publicly apologized to his actress wife Sandra Bullock for being unfaithful to her. His publicist has also announced that James will be checking into a rehabilitation facility in the hope of solving his personal issues and saving his marriage. Wrestling fans are in mourning following reports that Chris Kanyon has committed suicide.

On TV, people are watching popular shows such as "Two and a Half Men", "Desperate Housewives", "The Hills" and "Sons of Anarchy". Meanwhile, gamers are playing titles such as "Minecraft", "Farmville", "Call of Duty: Modern Warfare 2" and "God of War III". Kids and teenagers are watching TV shows such as "Dora the Explorer", "The Fairly OddParents", "Peppa Pig" and "Sonny with a Chance".

Popular toys at the moment include the likes of the PlayStation 3, Iggle Piggle, ZhuZhu Pets and ZhuZhu Pets.

If you are looking for some childhood nostalgia, then check out April 2nd, 2016 instead.

Barack Obama was the President of the United States on April 2nd, 2010.

Gordon Brown was the Prime Minister of the United Kingdom on April 2nd, 2010.

Enter your date of birth below to find out how old you were on April 2nd, 2010.

Here are some fun statistics about April 2nd, 2010.