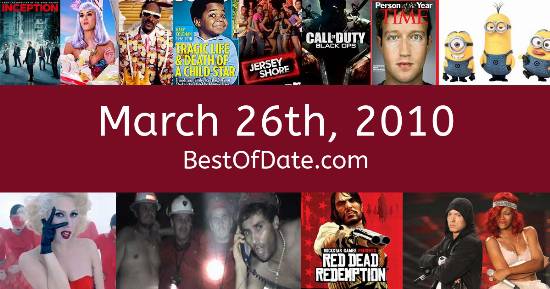 Songs that were on top of the music singles charts in the USA and the United Kingdom on March 26th, 2010.

The date is March 26th, 2010 and it's a Friday. Anyone born today will have the star sign Aries. Currently, people have "that Friday feeling" and are looking forward to the weekend.

Spring has arrived and the days have become longer. In America, the song Break Your Heart by Taio Cruz is on top of the singles charts. Over in the UK, Telephone by Lady GaGa ft Beyonce is the number one hit song.

The slang phrase "Come at me bro" is starting to become popular on the Internet. The last episode of the comedy series Scrubs has just been aired on television. Monster Garage host Jesse James has publicly apologized to his actress wife Sandra Bullock for being unfaithful to her.

A South Korean Navy ship carrying 104 personnel has sank off the west coast of South Korea, leaving 46 sailors dead. North Korea are currently being blamed for the sinking. On TV, people are watching popular shows such as "How I Met Your Mother", "Breaking Bad", "RuPaul's Drag Race" and "Jersey Shore". Meanwhile, gamers are playing titles such as "Farmville", "Heavy Rain", "Battlefield: Bad Company 2" and "God of War III".

Kids and teenagers are watching TV shows such as "One Tree Hill", "LazyTown", "Curious George" and "Phineas and Ferb". If you're a kid or a teenager, then you're probably playing with toys such as the PlayStation 3, Iggle Piggle, ZhuZhu Pets and the KidiZoom Camera.

If you are looking for some childhood nostalgia, then check out March 26th, 2016 instead.

Barack Obama was the President of the United States on March 26th, 2010.

Gordon Brown was the Prime Minister of the United Kingdom on March 26th, 2010.

Enter your date of birth below to find out how old you were on March 26th, 2010.