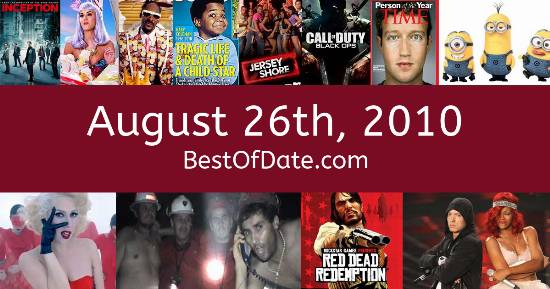 On August 26th, 2010, the following songs were at the top of the music charts in the USA and the UK.

The top "Box Office" movie on this date was the film "The Expendables".

The date is August 26th, 2010, and it's a Thursday. Anyone born today will have the star sign Virgo. The summer of 2010 is coming to an end and fall is just around the corner.

In America, the song Love The Way You Lie by Eminem ft Rihanna is on top of the singles charts. Over in the UK, Green Light by Roll Deep is the number one hit song. Barack Obama is currently the President of the United States, and the movie The Expendables is at the top of the Box Office.

Pop star Katy Perry has released her third album "Teenage Dream". The album contains songs such as "California Gurls" and "Firework". In the United Kingdom, Josie Gibson has just won the 11th season of the reality TV series Big Brother. Popular news aggregation website Digg has enraged its users with the release of a new redesign called "Digg V4". This unpopular redesign has led to disgruntled users leaving Digg for its competitor Reddit.

If you were to travel back to this day, notable figures such as Denise Borino-Quinn, Pete Postlethwaite, Nate Dogg and Elizabeth Taylor would all be still alive. On TV, people are watching popular shows such as "CSI: Miami", "House", "Mad Men" and "The Big Bang Theory". Meanwhile, gamers are playing titles such as "Grand Theft Auto: Chinatown Wars", "Uncharted 2: Among Thieves", "League of Legends" and "Red Dead Redemption".

Children and teenagers are currently watching television shows such as "One Tree Hill", "Wizards of Waverly Place", "Sonny with a Chance" and "Glee". Popular toys at the moment include the likes of the Xbox 360, the KidiZoom Camera, ZhuZhu Pets and the iPad.

These are trending news stories and fads that were prevalent at this time. These are topics that would have been in the media on August 26th, 2010.

Check out our personality summary for people who were born on August 26th, 2010.

If you are looking for some childhood nostalgia, then you should check out August 26th, 2016 instead.

Barack Obama was the President of the United States on August 26th, 2010.

David Cameron was the Prime Minister of the United Kingdom on August 26th, 2010.

Enter your date of birth below to find out how old you were on August 26th, 2010.
This information is not transmitted to our server.