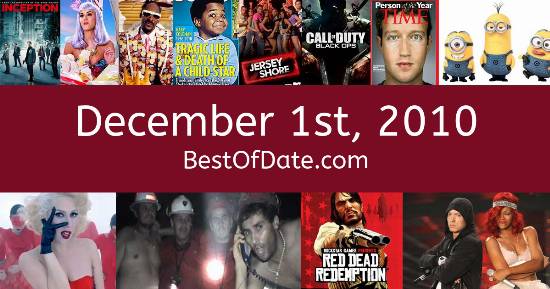 Songs that were on top of the music singles charts in the USA and the United Kingdom on December 1st, 2010.

The movie "Harry Potter and the Deathly Hallows: Part 1" was at the top of the box office on December 1st, 2010.

The date is December 1st, 2010 and it's a Wednesday. Anyone born today will have the star sign Sagittarius. In America, the song Like A G6 by Far East Movement is on top of the singles charts.

Over in the UK, Heroes by X Factor Finalists 2010 is the number one hit song. Barack Obama is currently the President of the United States and the movie Harry Potter and the Deathly Hallows: Part 1 is at the top of the Box Office. In the United Kingdom, David Cameron is the current Prime Minister.

Pre-made comics called "Rage Comics" are extremely popular on the Internet at the moment, as people use them to share relatable experiences. Tributes are pouring in for actor Leslie Nielsen, who has passed away at the age of 84. It has been announced that Ireland will receive a 85 billion Euro bailout loan. The country has been struggling to come to grips with a financial crisis that is threatening its banking system.

Rob Ford has officially become the new mayor of Toronto. If you were to travel back to this day, notable figures such as Pete Postlethwaite, Nate Dogg, Elizabeth Taylor and Randy Savage would all be still alive. On TV, people are watching popular shows such as "Dora the Explorer", "House", "RuPaul's Drag Race" and "Boardwalk Empire".

Meanwhile, gamers are playing titles such as "God of War III", "Alan Wake", "StarCraft II: Wings of Liberty" and "Halo: Reach". Children and teenagers are currently watching television shows such as "One Tree Hill", "iCarly", "The Suite Life on Deck" and "Glee". Popular toys at the moment include the likes of the Xbox 360, Iggle Piggle, ZhuZhu Pets and ZhuZhu Pets.

If you are looking for some childhood nostalgia, then check out December 1st, 2016 instead.

Comedian. Deceased
Born on December 1st, 1940
He was not alive on this date.

Colombian drug lord. Deceased
Born on December 1st, 1949
He was not alive on this date.

Barack Obama was the President of the United States on December 1st, 2010.

David Cameron was the Prime Minister of the United Kingdom on December 1st, 2010.

Enter your date of birth below to find out how old you were on December 1st, 2010.

Here are some fun statistics about December 1st, 2010.

Have something to say about December 1st, 2010?