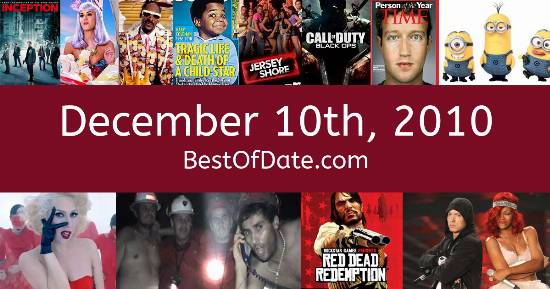 Songs that were on top of the music singles charts in the USA and the United Kingdom on December 10th, 2010.

The date is December 10th, 2010 and it's a Friday. Anyone born today will have the star sign Sagittarius. Currently, people have "that Friday feeling" and are looking forward to the weekend.

The Christmas season of 2010 is in full swing. The decorations are up and festive songs are playing on the radio. In America, the song Only Girl by Rihanna is on top of the singles charts. Over in the UK, Heroes by X Factor Finalists 2010 is the number one hit song.

Barack Obama is currently the President of the United States and the movie Chronicles of Narnia 3 is at the top of the Box Office. In the United Kingdom, David Cameron is the current Prime Minister. The term "hipster" is currently growing in use. The word is being used to describe people who are pretentious and deliberately anti-mainstream.

Former X-Factor contestant Stacey Solomon has won the UK version of "I'm a Celebrity... Get Me Out of Here!". If you were to travel back to this day, notable figures such as Pete Postlethwaite, Nate Dogg, Elizabeth Taylor and Randy Savage would all be still alive. On TV, people are watching popular shows such as "One Tree Hill", "Extreme Makeover: Home Edition", "The Vampire Diaries" and "Boardwalk Empire".

Meanwhile, gamers are playing titles such as "StarCraft II: Wings of Liberty", "Halo: Reach", "Fallout: New Vegas" and "Assassin's Creed: Brotherhood". Kids and teenagers are watching TV shows such as "Phineas and Ferb", "Big Time Rush", "Victorious" and "Good Luck Charlie". Popular toys at the moment include the likes of Iggle Piggle, ZhuZhu Pets, the KidiZoom Camera and ZhuZhu Pets.

If you are looking for some childhood nostalgia, then check out December 10th, 2016 instead.

Barack Obama was the President of the United States on December 10th, 2010.

David Cameron was the Prime Minister of the United Kingdom on December 10th, 2010.

Enter your date of birth below to find out how old you were on December 10th, 2010.

Here are some fun statistics about December 10th, 2010.