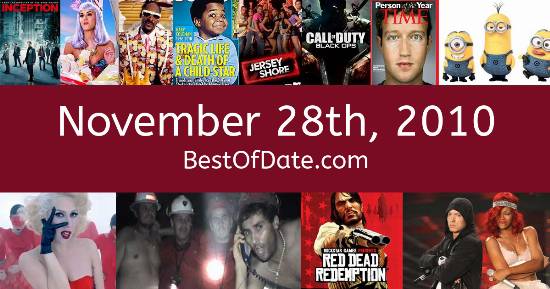 On November 28th, 2010, the following songs were at the top of the music charts in the USA and the UK.

The top "Box Office" movie on this date was the film "Harry Potter and the Deathly Hallows: Part 1".

The date is November 28th, 2010, and it's a Sunday. Anyone born today will have the star sign Sagittarius. Currently, people are enjoying their weekend.

In America, Thanksgiven Day and Black Friday have recently come and passed. People are now beginning to look forward to Christmas. It's November, so the evenings are getting darker and the days are getting colder. In America, the song What's My Name by Rihanna ft Drake is on top of the singles charts.

Over in the UK, Love You More by JLS is the number one hit song. Barack Obama is currently the President of the United States, and the movie Harry Potter and the Deathly Hallows: Part 1 is at the top of the Box Office. In the United Kingdom, David Cameron is the current Prime Minister.

Pre-made comics called "Rage Comics" are extremely popular on the Internet at the moment, as people use them to share relatable experiences. A new post-apocalyptic zombie TV series called "The Walking Dead" has just debuted on AMC. Treyarch have just released the FPS game Call of Duty: Black Ops.

North Korean forces have killed four South Koreans after firing artillery shells and rockets at Yeonpyeong Island. South Korean forces have responded to the attack by firing on North Korean gun positions. The incident has heightened tensions between the two countries. Tributes are pouring in for actor Leslie Nielsen, who has passed away at the age of 84. If you were to travel back to this day, notable figures such as Leslie Nielsen, Pete Postlethwaite, Nate Dogg and Elizabeth Taylor would all be still alive.

On TV, people are watching popular shows such as "CSI: NY", "Grey's Anatomy", "True Blood" and "Jersey Shore". Meanwhile, gamers are playing titles such as "Mafia Wars", "God of War III", "Alan Wake" and "Halo: Reach". Kids and teenagers are watching TV shows such as "Dora the Explorer", "Peppa Pig", "The Suite Life on Deck" and "Big Time Rush".

Popular toys at the moment include the likes of the PlayStation 3, Iggle Piggle, ZhuZhu Pets and the iPad.

These are trending news stories and fads that were prevalent at this time. These are topics that would have been in the media on November 28th, 2010.

Check out our personality summary for people who were born on November 28th, 2010.

Television shows that people were watching in November, 2010.

Popular video games that people were playing in November of 2010.

If you are looking for some childhood nostalgia, then you should check out November 28th, 2016, instead.

Model. Deceased
Born on November 28th, 1967
She was not alive on this date.

Barack Obama was the President of the United States on November 28th, 2010.

Enter your date of birth below to find out how old you were on November 28th, 2010.
This information is not transmitted to our server.

Here are some fun statistics about November 28th, 2010.