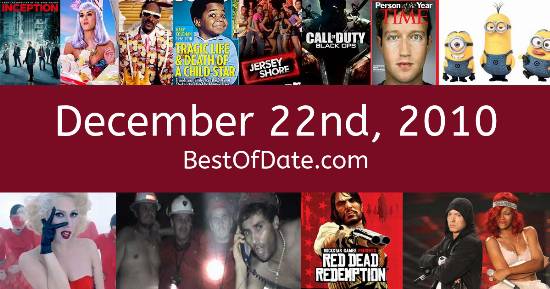 Songs that were on top of the music singles charts in the USA and the United Kingdom on December 22nd, 2010.

The date is December 22nd, 2010 and it's a Wednesday. Anyone born today will have the star sign Capricorn. Christmas Day of 2010 is fast approaching and the excitement is building. Department stores are thronged with Christmas shoppers.

People on the Internet are using the phrase "That Really Rustled My Jimmies" to express their annoyance at things. Anti-government street demonstrations are taking place in Tunisia following the the self-immolation of a man called Mohamed Bouazizi. The protests have been caused by high unemployment and the cost of food. The US Military has officially repealed its controversial "Don't Ask, Don't Tell" policy.

If you were to travel back to this day, notable figures such as Pete Postlethwaite, Nate Dogg, Elizabeth Taylor and Randy Savage would all be still alive. On TV, people are watching popular shows such as "CSI: Miami", "Extreme Makeover: Home Edition", "How I Met Your Mother" and "The Vampire Diaries". Meanwhile, gamers are playing titles such as "Mass Effect 2", "Fallout: New Vegas", "Call of Duty: Black Ops" and "Assassin's Creed: Brotherhood".

Kids and teenagers are watching TV shows such as "Ben 10", "Wizards of Waverly Place", "The Suite Life on Deck" and "Victorious". If you're a kid or a teenager, then you're probably playing with toys such as ZhuZhu Pets, the KidiZoom Camera, ZhuZhu Pets and the iPad.

If you are looking for some childhood nostalgia, then check out December 22nd, 2016 instead.

Barack Obama was the President of the United States on December 22nd, 2010.

David Cameron was the Prime Minister of the United Kingdom on December 22nd, 2010.

Enter your date of birth below to find out how old you were on December 22nd, 2010.

Here are some fun statistics about December 22nd, 2010.