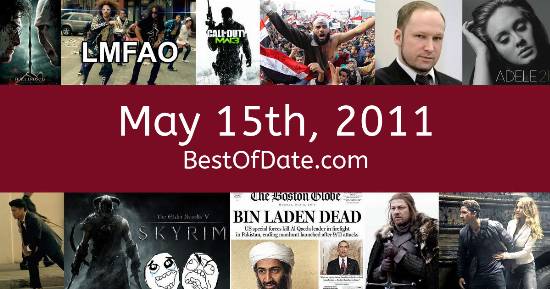 Songs that were on top of the music singles charts in the USA and the United Kingdom on May 15th, 2011:

The date is May 15th, 2011 and it's a Sunday. Anyone born today will have the star sign Taurus. Currently, people are enjoying their weekend.

The summer of 2011 has finally arrived. The weather has warmed up and the evenings are brighter than usual. In America, the song E.T. by Katy Perry ft Kanye West is on top of the singles charts. Over in the UK, Party Rock Anthem by LMFAO is the number one hit song.

Barack Obama is currently the President of the United States and the movie Thor is at the top of the Box Office. In the United Kingdom, David Cameron is the current Prime Minister. The term "hipster" is currently growing in use. The word is being used to describe people who are pretentious and deliberately anti-mainstream.

Pre-made comics called "Rage Comics" are extremely popular on the Internet at the moment, as people use them to share relatable experiences. It's 2011, so the music charts are being dominated by artists such as Adele, LMFAO, Katy Perry and Bruno Mars. The catchphrase "Every Day I'm Shufflin'" is being repeated and parodied following the success of LMAO's song "Party Rock Anthem".

Arnold Schwarzenegger and Maria Shriver have ended their relationship after 25 years of marriage. Internet users are currently making memes and jokes about the 21st of May, 2011, which Harold Camping has predicted will bring the "Rapture". Gaming website Kotaku has just revealed that the next Call of Duty game will be called "Modern Warfare 3". Shortly after the leaks were publicized, four teaser trailers were uploaded by the official Call of Duty Youtube page.

Azerbaijan have won the 2011 Eurovision Song Contest with the song "Running Scared" by Ell & Nikki. The recent killing of wanted terrorist leader Osama Bin Laden at the start of this month is continuing to be a topic of discussion. On TV, people are watching popular shows such as "CSI: Miami", "The Office", "Sons of Anarchy" and "Jersey Shore".

Meanwhile, gamers are playing titles such as "Farmville", "Halo: Reach", "Fallout: New Vegas" and "Duke Nukem Forever". Children and teenagers are currently watching television shows such as "Dora the Explorer", "Go, Diego, Go!", "Big Time Rush" and "Jake and the Never Land Pirates". Popular toys include the likes of "Xbox 360", "PlayStation 3" and "iPad".

Notable events that occurred around May 15th, 2011:

Who was the Prime Minister of the United Kingdom on May 15th, 2011?

Looking for some nostalgia? Here are some Youtube videos relating to May 15th, 2011. Please note that videos are automatically selected by Youtube and that results may vary! Click on the "Load Next Video" button to view the next video in the search playlist. In many cases, you'll find episodes of old TV shows, documentaries, music videos and soap dramas.