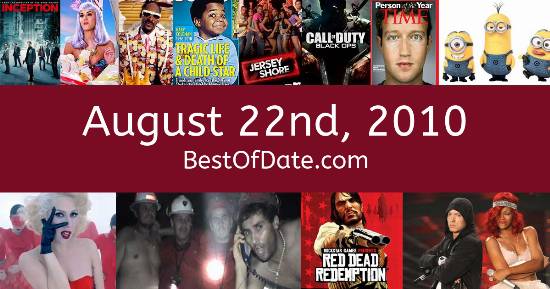 Songs that were on top of the music singles charts in the USA and the United Kingdom on August 22nd, 2010:

The date is August 22nd, 2010 and it's a Sunday. Anyone born today will have the star sign Leo. Currently, people are enjoying their weekend.

The summer of 2010 is coming to an end and fall is just around the corner. In America, the song Love The Way You Lie by Eminem ft Rihanna is on top of the singles charts. Over in the UK, Club Can't Handle Me by Flo Rida ft David Guetta is the number one hit song.

Barack Obama is currently the President of the United States and the movie The Expendables is at the top of the Box Office. In the United Kingdom, David Cameron is the current Prime Minister. The term "hipster" is currently growing in use. The word is being used to describe people who are pretentious and deliberately anti-mainstream.

It has been announced that actor Michael Douglas is suffering from throat cancer. Meanwhile, CeeLo Green has released a new catchy song called "F**ck you!" In Australian politics, Julia Gillard's Labor Government have been re-elected.

On TV, people are watching popular shows such as "Dora the Explorer", "CSI: Miami", "CSI: NY" and "Glee". Meanwhile, gamers are playing titles such as "Call of Duty: Modern Warfare 2", "Left 4 Dead 2", "Mass Effect 2" and "Alan Wake". Children and teenagers are currently watching television shows such as "Ben 10", "Hannah Montana", "The Suite Life on Deck" and "Team Umizoomi".

Celebrities, historical figures and noteable people who were born on the 22nd of August:

National holidays and famous events that fall on the 22nd of August:

Who was the Prime Minister of the United Kingdom on August 22nd, 2010?

Enter your date of birth below to find out how old you were on August 22nd, 2010.

Looking for some nostalgia? Here are some Youtube videos relating to August 22nd, 2010. Please note that videos are automatically selected by Youtube and that results may vary! Click on the "Load Next Video" button to view the next video in the search playlist. In many cases, you'll find episodes of old TV shows, documentaries, music videos and soap dramas.