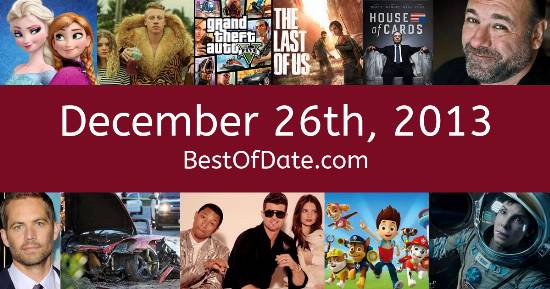 Songs that were on top of the music singles charts in the USA and the United Kingdom on December 26th, 2013.

The date is December 26th, 2013 and it's a Thursday. Anyone born today will have the star sign Capricorn. Christmas Day of 2013 has just passed and many people are relaxing at home and enjoying the holiday season.

In America, the song The Monster by Eminem ft Rihanna is on top of the singles charts. Over in the UK, Happy by Pharrell Williams is the number one hit song. Barack Obama is currently the President of the United States and the movie Frozen is at the top of the Box Office.

A mobile game called "Flappy Bird" is currently surging in popularity. If you were to travel back to this day, notable figures such as James Avery, Ariel Sharon, Philip Seymour Hoffman and Viscera would all be still alive. On TV, people are watching popular shows such as "RuPaul's Drag Race", "Glee", "Boardwalk Empire" and "American Horror Story".

Meanwhile, gamers are playing titles such as "Tomb Raider", "BioShock Infinite", "Assassin's Creed IV: Black Flag" and "Dead Rising 3". Children and teenagers are currently watching television shows such as "Dora the Explorer", "Glee", "Team Umizoomi" and "Lab Rats: Bionic Island". Popular toys at the moment include the likes of the Wii U, Rainbow Loom, the Furby Boom and the Xbox One.

If you are looking for some childhood nostalgia, then check out December 26th, 2019 instead.

Barack Obama was the President of the United States on December 26th, 2013.

David Cameron was the Prime Minister of the United Kingdom on December 26th, 2013.

Enter your date of birth below to find out how old you were on December 26th, 2013.

Here are some fun statistics about December 26th, 2013.