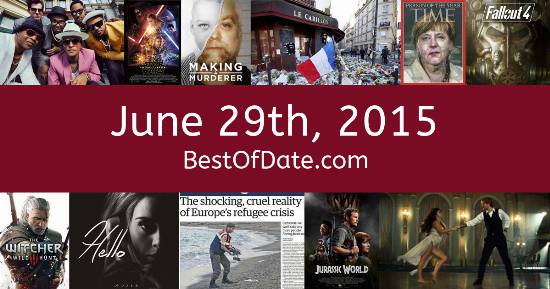 Songs that were on top of the music singles charts in the USA and the United Kingdom on June 29th, 2015.

The date is June 29th, 2015 and it's a Monday. Anyone born today will have the star sign Cancer. It's summer, so the temperatures are warmer and the evenings are longer than usual.

In America, the song See You Again by Wiz Khalifa featuring Charlie Puth is on top of the singles charts. Over in the UK, Want to Want Me by Jason Derulo is the number one hit song. Barack Obama is currently the President of the United States and the movie Jurassic World is at the top of the Box Office.

The Greek debt crisis is currently a major topic of conversation after the Syriza-led government breaks off negotiations with the EU. A referendum has been called and ATM access has been restricted to prevent a bank run. In soccer, Chelsea goalkeeper Petr Čech has just signed for London rivals Arsenal. On TV, people are watching popular shows such as "Bones", "Suits", "Rick and Morty" and "Jane the Virgin".

Meanwhile, gamers are playing titles such as "Alien: Isolation", "Assassin's Creed: Unity", "Mortal Kombat X" and "The Witcher 3: Wild Hunt". Children and teenagers are currently watching television shows such as "Dora the Explorer", "Doc McStuffins", "Paw Patrol" and "Henry Danger". Popular toys at the moment include the likes of the PlayStation 4 and the Xbox One.

Barack Obama was the President of the United States on June 29th, 2015.

David Cameron was the Prime Minister of the United Kingdom on June 29th, 2015.