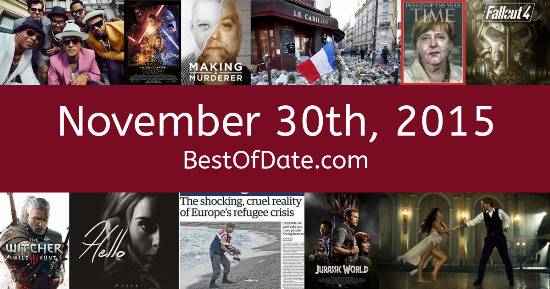 Songs that were on top of the music singles charts in the USA and the United Kingdom on November 30th, 2015.

The date is November 30th, 2015 and it's a Monday. Anyone born today will have the star sign Sagittarius. In America, Thanksgiven Day and Black Friday have recently come and passed. People are now beginning to look forward to Christmas.

It's November, so the evenings are getting darker and the days are getting colder. In America, the song Hello by Adele is on top of the singles charts. Over in the UK, Sorry by Justin Bieber is the number one hit song.

Barack Obama is currently the President of the United States and the movie The Hunger Games: Mockingjay - Part 2 is at the top of the Box Office. In the United Kingdom, David Cameron is the current Prime Minister. It's 2015, so the music charts are being dominated by the likes of OMI, Bruno Mars, Ellie Goulding, Adele, Justin Bieber and Hozier.

The Internet slang phrase "Netflix and chill" is becoming more and more popular. Meanwhile, a gesture called "the Dab" is beginning to take off in popularity. Sports stars in particular are starting to incorporate the move into their celebrations. Tensions are currently simmering in the Middle East following Turkey's decision to shoot down a Russian military jet at the border between Turkey and Syria.

In Boxing, Tyson Fury has defeated Wladimir Klitschko. Fury's win by unanimous decision puts an end to Klitschko's reign of nearly 10 years. NBA star Kobe Bryant has just announced that he will be retiring at the end of the season. On TV, people are watching popular shows such as "Bones", "RuPaul's Drag Race", "Suits" and "Black Mirror".

Meanwhile, gamers are playing titles such as "Batman: Arkham Knight", "Metal Gear Solid V: The Phantom Pain", "Halo 5: Guardians" and "Fallout 4". Kids and teenagers are watching TV shows such as "Jake and the Never Land Pirates", "Paw Patrol", "Every Witch Way" and "Sheriff Callie's Wild West". Popular toys at the moment include the likes of the Furby Boom, the PlayStation 4, the Xbox One and Barbie Saddle n Ride.

Barack Obama was the President of the United States on November 30th, 2015.

David Cameron was the Prime Minister of the United Kingdom on November 30th, 2015.

Enter your date of birth below to find out how old you were on November 30th, 2015.

Here are some fun statistics about November 30th, 2015.