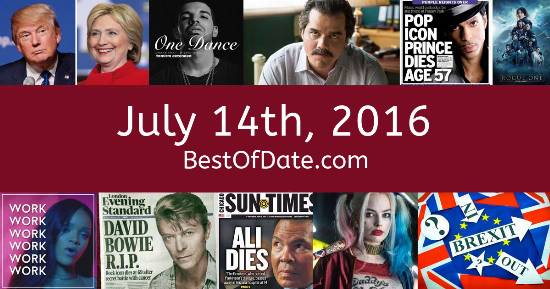 Songs that were on top of the music singles charts in the USA and the United Kingdom on July 14th, 2016.

The date is July 14th, 2016 and it's a Thursday. Anyone born today will have the star sign Cancer. It's summer, so the temperatures are warmer and the evenings are longer than usual.

Theresa May has become the new Prime Minister of the United Kingdom. The world is reacting to a horrific terrorist attack that has just claimed the lives of 86 people in Nice, France. The perpetrator drove a cargo truck into crowds of people as they were celebrating Bastille Day. On TV, people are watching popular shows such as "Suits", "House of Cards", "Orange Is the New Black" and "Power".

Meanwhile, gamers are playing titles such as "Overwatch", "Overwatch", "Inside" and "Pokemon Go". Kids and teenagers are watching TV shows such as "Jake and the Never Land Pirates", "Paw Patrol", "Nicky, Ricky, Dicky & Dawn" and "Game Shakers". If you're a kid or a teenager, then you're probably playing with toys such as the PlayStation 4, Barbie Saddle n Ride, Star Wars BB-8 toy droid and L.O.L. Surprise!.

US President. Deceased
Born on July 14th, 1913
He was not alive on this date.

Barack Obama was the President of the United States on July 14th, 2016.

Theresa May was the Prime Minister of the United Kingdom on July 14th, 2016.