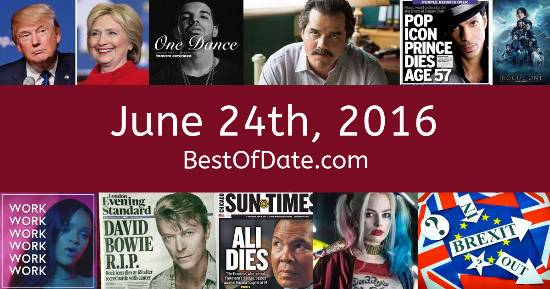 Songs that were on top of the music singles charts in the USA and the United Kingdom on June 24th, 2016.

The date is June 24th, 2016 and it's a Friday. Anyone born today will have the star sign Cancer. Currently, people have "that Friday feeling" and are looking forward to the weekend.

America is in shock following a mass shooting inside Pulse, a gay nightclub in Orlando, Florida. The terrorist attack has left 49 people dead. The killing of a gorilla called Harambe back in May continues to be a topic of conversation. Harambe has achieved a cult-like status, as memes and over-the-top tributes continue to be made in his memory. The Cleveland sports curse has finally come to and end, as the Cleveland Cavaliers win the 2016 NBA Finals by defeating the Golden State Warriors.

The UK has just voted to leave the European Union and Prime Minister David Cameron has resigned. The British Pound has tumbled to historic lows in the aftermath of the Brexit vote. If you were to travel back to this day, notable figures such as Fidel Castro, Big Syke, George Michael and Carrie Fisher would all be still alive. On TV, people are watching popular shows such as "Peaky Blinders", "Power", "Better Call Saul" and "Making a Murderer".

Meanwhile, gamers are playing titles such as "Batman: Arkham Knight", "Overwatch", "Dark Souls III" and "Overwatch". Children and teenagers are currently watching television shows such as "Sheriff Callie's Wild West", "Girl Meets World", "Henry Danger" and "Bunnicula". If you're a kid or a teenager, then you're probably playing with toys such as the PlayStation 4, the Xbox One, Star Wars BB-8 toy droid and L.O.L. Surprise!.

Barack Obama was the President of the United States on June 24th, 2016.

David Cameron was the Prime Minister of the United Kingdom on June 24th, 2016.