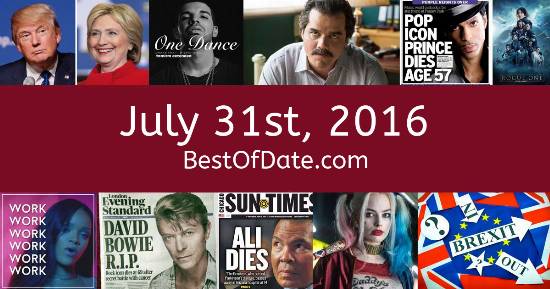 On July 31st, 2016, the following songs were at the top of the music charts in the USA and the UK.

The top "Box Office" movie on this date was the film "Jason Bourne".

The date is July 31st, 2016, and it's a Sunday. Anyone born today will have the star sign Leo. Currently, people are enjoying their weekend.

It's summer, so the temperatures are warmer and the evenings are longer than usual. The song One Dance by Drake is on top of the singles charts in both the USA and the United Kingdom. Barack Obama is currently the President of the United States, and the movie Jason Bourne is at the top of the Box Office.

The UK has just voted to leave the European Union and Prime Minister David Cameron has resigned. The British Pound has tumbled to historic lows in the aftermath of the Brexit vote. An augmented reality mobile game called Pokémon GO has recently been released. The game is rapidly rising in popularity. Hillary Clinton has just defeated Bernie Sanders to become nominated as the Democratic presidential candidate for the 2016 election.

A meme called "Arthur's Fist" is currently going viral on the Internet. The reaction image, which is used to highlight infuriating situations, features Arthur from the TV series holding a clinched fist. If you were to travel back to this day, notable figures such as Fidel Castro, Big Syke, George Michael and Carrie Fisher would all be still alive. On TV, people are watching popular shows such as "The Big Bang Theory", "Modern Family", "Making a Murderer" and "Stranger Things".

Meanwhile, gamers are playing titles such as "Batman: Arkham Knight", "Call of Duty: Black Ops III", "Halo 5: Guardians" and "Tom Clancy's The Division". Children and teenagers are currently watching television shows such as "Mickey Mouse Clubhouse", "Doc McStuffins", "Agents of S.H.I.E.L.D." and "Sheriff Callie's Wild West". Popular toys at the moment include the likes of the PlayStation 4, the Xbox One, Barbie Saddle n Ride and Star Wars BB-8 toy droid.

These are trending news stories and fads that were prevalent at this time. These are topics that would have been in the media on July 31st, 2016.

News stories and other events that happened around July 31st, 2016.

Check out our personality summary for people who were born on July 31st, 2016.

Television shows that people were watching in July, 2016.

Popular video games that people were playing in July of 2016.

Barack Obama was the President of the United States on July 31st, 2016.

Theresa May was the Prime Minister of the United Kingdom on July 31st, 2016.

Find out what your age was on July 31st, 2016, by entering your DOB below.
This information is not saved on our server.