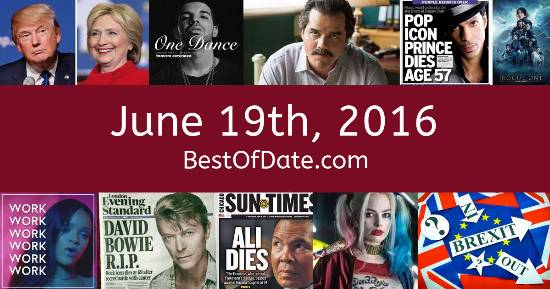 Songs that were on top of the music singles charts in the USA and the United Kingdom on June 19th, 2016.

The date is June 19th, 2016 and it's a Sunday. Anyone born today will have the star sign Gemini. Currently, people are enjoying their weekend.

America is in shock following a mass shooting inside Pulse, a gay nightclub in Orlando, Florida. The terrorist attack has left 49 people dead. The killing of a gorilla called Harambe back in May continues to be a topic of conversation. Harambe has achieved a cult-like status, as memes and over-the-top tributes continue to be made in his memory. The Cleveland sports curse has finally come to and end, as the Cleveland Cavaliers win the 2016 NBA Finals by defeating the Golden State Warriors.

Barack Obama was the President of the United States on June 19th, 2016.

David Cameron was the Prime Minister of the United Kingdom on June 19th, 2016.