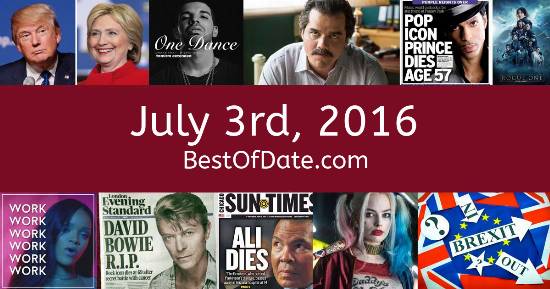 Songs that were on top of the music singles charts in the USA and the United Kingdom on July 3rd, 2016.

The date is July 3rd, 2016 and it's a Sunday. Anyone born today will have the star sign Cancer. Currently, people are enjoying their weekend.

In America, the July 4th celebrations are fast approaching. It's summer, so the temperatures are warmer and the evenings are longer than usual. The song One Dance by Drake is on top of the singles charts in both the USA and the United Kingdom.

Barack Obama is currently the President of the United States and the movie Finding Dory is at the top of the Box Office. In the United Kingdom, David Cameron is the current Prime Minister. It's 2016, so the music charts are being dominated by artists such as Drake, Lukas Graham, Sia, Mike Posner, The Chainsmokers and Calvin Harris.

The 2016 UEFA European Football Championship is taking place in France. The killing of a gorilla called Harambe back in May continues to be a topic of conversation. Harambe has achieved a cult-like status, as memes and over-the-top tributes continue to be made in his memory. The UK has just voted to leave the European Union and Prime Minister David Cameron has resigned. The British Pound has tumbled to historic lows in the aftermath of the Brexit vote.

In soccer, Manchester United have just announced the signing of Zlatan Ibrahimovic. If you were to travel back to this day, notable figures such as Fidel Castro, Big Syke, George Michael and Carrie Fisher would all be still alive. On TV, people are watching popular shows such as "Prison Break", "Homeland", "American Horror Story" and "Jane the Virgin".

Meanwhile, gamers are playing titles such as "Batman: Arkham Knight", "Rocket League", "Call of Duty: Black Ops III" and "Inside". Children and teenagers are currently watching television shows such as "Jake and the Never Land Pirates", "Sheriff Callie's Wild West", "Girl Meets World" and "Bunnicula". Popular toys at the moment include the likes of the Xbox One, Barbie Saddle n Ride, Star Wars BB-8 toy droid and L.O.L. Surprise!.

Barack Obama was the President of the United States on July 3rd, 2016.

David Cameron was the Prime Minister of the United Kingdom on July 3rd, 2016.

Enter your date of birth below to find out how old you were on July 3rd, 2016.

Here are some fun statistics about July 3rd, 2016.