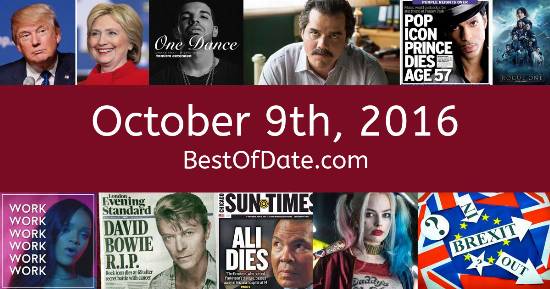 Songs that were on top of the music singles charts in the USA and the United Kingdom on October 9th, 2016:

The date is October 9th, 2016 and it's a Sunday. Anyone born today will have the star sign Libra. Currently, people are enjoying their weekend.

The summer is long gone. Temperatures have started to become much cooler and the evenings are beginning to get darker. Fallen leaves have carpeted driveways, lawns, pathways and sidewalks and there's a fresh earthy scent in the ear. In America, the song Closer by The Chainsmokers is on top of the singles charts.

Over in the UK, Say You Won't Let Go by James Arthur is the number one hit song. Barack Obama is currently the President of the United States and the movie The Girl on the Train is at the top of the Box Office. In the United Kingdom, Theresa May is the current Prime Minister.

It's 2016, so the music charts are being dominated by artists such as Drake, Lukas Graham, Sia, Mike Posner, The Chainsmokers and Calvin Harris. The 2016 United States presidential election is in full swing, with Hillary Clinton facing off against Donald Trump. A video clip of Danielle Bregoli shouting "Catch me outside, how about that?" is going viral as social media users repeatedly mimic her catch phrase.

The "Evil Kermit" meme is currently going viral, as people use the format to describe their battles with their inner conscience. The media is reporting that Kim Kardashian has been robbed at gunpoint in Paris by men disguised as police. The masked men made off with millions of dollars worth of jewellery. The 2016 US presidential election has been engulfed by a number of dramatic events. Russia has been publicly accused of trying to interfere with the election. The Washington Post has released an audio of Republican nominee Donald Trump making lewd remarks about grabbing women "by the p***y." Wikileaks has just released private emails belonging to Democratic nominee Hillary Clinton.

If you're a kid or a teenager, then you're probably playing with toys such as "PlayStation 4", "Xbox One", "Star Wars BB-8 toy droid" and "Hatchimals".

Celebrities, historical figures and noteable people who were born on the 9th of October:

Who was the Prime Minister of the United Kingdom on October 9th, 2016?

Enter your date of birth below to find out how old you were on October 9th, 2016.

Looking for some nostalgia? Here are some Youtube videos relating to October 9th, 2016. Please note that videos are automatically selected by Youtube and that results may vary! Click on the "Load Next Video" button to view the next video in the search playlist. In many cases, you'll find episodes of old TV shows, documentaries, music videos and soap dramas.

Here are some fun statistics about October 9th, 2016.