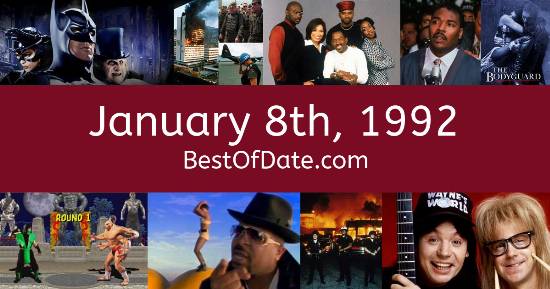 Songs that were on top of the music singles charts in the USA and the United Kingdom on January 8th, 1992.

The date is January 8th, 1992 and it's a Wednesday. Anyone born today will have the star sign Capricorn. The Christmas holiday season is long over, the decorations have been taken down and a sense of normality has returned.

In Europe, the Soviet Union has officially come to an end. Russia has renamed itself as the Russian Federation. Mikhail Gorbachev has resigned from his position as the president of the Soviet Union and the Supreme Soviet body has met for the last time to formally dissolve the union. It's 1992, so radio stations are being dominated by the likes of Kris Kross, Boyz II Men, Whitney Houston, Sir Mix-a-Lot, Right Said Fred, Snap! and Nirvana. US President George H. W. Bush has fallen ill during a televised state dinner in Japan. Footage shows him vomiting into the lap of Japanese Prime Minister Kiichi Miyazawa and fainting.

On TV, people are watching popular shows such as "Who's the Boss?", "One Foot in the Grave", "Blossom" and "Baywatch". Meanwhile, gamers are playing titles such as "Battletoads", "Sonic the Hedgehog", "Streets of Rage" and "Super Castlevania IV". Children and teenagers are currently watching television shows such as "Mister Rogers' Neighborhood", "Danger Mouse", "Count Duckula" and "Noozles".

Popular toys at the moment include the likes of the Easy-Bake Oven, Sylvanian Families, Micro Machines and Polly Pocket.

If you are looking for some childhood nostalgia, then check out January 8th, 1998 instead.

George W. Bush Snr. was the President of the United States on January 8th, 1992.

John Major was the Prime Minister of the United Kingdom on January 8th, 1992.

Enter your date of birth below to find out how old you were on January 8th, 1992.

Here are some fun statistics about January 8th, 1992.