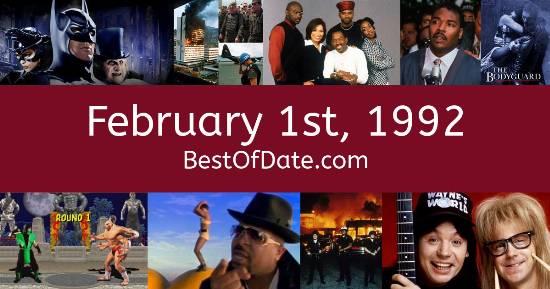 Songs that were on top of the music singles charts in the USA and the United Kingdom on February 1st, 1992:

The date is February 1st, 1992 and it's a Saturday. Anyone born today will have the star sign Aquarius. Currently, people are enjoying their weekend.

In America, the song Don't Let The Sun Go Down On Me by George Michael & Elton John is on top of the singles charts. Over in the UK, Goodnight Girl by Wet Wet Wet is the number one hit song. George W. Bush Snr. is currently the President of the United States and the movie The Hand That Rocks the Cradle is at the top of the Box Office.

It's 1992, so radio stations are being dominated by the likes of Kris Kross, Boyz II Men, Whitney Houston, Sir Mix-a-Lot, Right Said Fred, Snap! and Nirvana. The Washington Redskins have just won Super Bowl XXVI after defeating the Buffalo Bills by 37-24 at the Metrodome in Minneapolis, Minnesota. Department chain Macy's has just filed for Chapter 11 bankruptcy protection amid mounting losses and an estimated debt of around $5.3 billion.

In Ireland, Charles Haughey has resigned as leader of Fianna Fail. His resignation comes on the back of recent revelations that he authorized the phone-tapping of two journalists back in 1982. In Milwaukee, the trial of suspected serial killer Jeffrey Dahmer has just begun. Dahmer is being charged with four counts of first-degree murder. Following the recent breakup of the Soviet Union, Russian president Boris Yeltsin and US president George H. W. Bush have announced that they will both stop aiming nuclear weapons at one another. Furthermore, the pair have met at Camp David and formally declared that the Cold War is officially over.

On TV, people are watching popular shows such as "MacGyver", "Matlock", "Full House" and "Blossom". Meanwhile, gamers are playing titles such as "Streets of Rage", "F-16 Combat Pilot", "Super Castlevania IV" and "Desert Strike ". Kids and teenagers are watching TV shows such as "Teenage Mutant Ninja Turtles", "Saved by the Bell", "The Fresh Prince of Bel-Air" and "Doug".

Celebrities, historical figures and noteable people who were born on the 1st of February:

National holidays and famous events that fall on the 1st of February:

Who was the Prime Minister of the United Kingdom on February 1st, 1992?

Enter your date of birth below to find out how old you were on February 1st, 1992.

Looking for some nostalgia? Here are some Youtube videos relating to February 1st, 1992. Please note that videos are automatically selected by Youtube and that results may vary! Click on the "Load Next Video" button to view the next video in the search playlist. In many cases, you'll find episodes of old TV shows, documentaries, music videos and soap dramas.

Here are some fun statistics about February 1st, 1992.