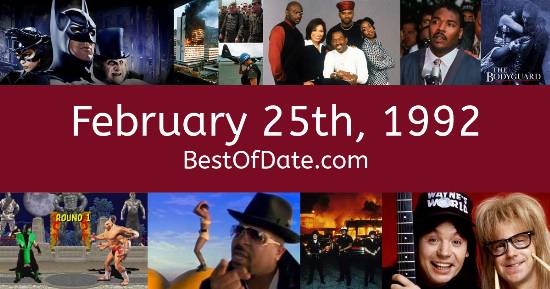 Songs that were on top of the music singles charts in the USA and the United Kingdom on February 25th, 1992.

The date is February 25th, 1992 and it's a Tuesday. Anyone born today will have the star sign Pisces. In America, the song To Be With You by Mr. Big is on top of the singles charts.

Over in the UK, Stay by Shakespears Sisters is the number one hit song. George W. Bush Snr. is currently the President of the United States and the movie Medicine Man is at the top of the Box Office. In the United Kingdom, John Major is the current Prime Minister.

It's 1992, so radio stations are being dominated by the likes of Kris Kross, Boyz II Men, Whitney Houston, Sir Mix-a-Lot, Right Said Fred, Snap! and Nirvana. The trial of four police officers for the 1991 beating of Rodney King back is currently taking in Simi Valley, California. The comedy film "Wayne's World", starring Mike Myers, is currently showing in movie theaters.

The UN Security Council has approved plans to send a UN peacekeeping force into Yugoslavia. In Australia and New Zealand, the 1992 Cricket World Cup is currently taking place. In celebrity news, Nirvana singer Kurt Cobain and Courtney Love have just been married in Hawaii.

Meanwhile, Irish rock band U2 have recently released their new song "One". Nicole Brown has just filed for divorce from former NFL star O.J. Simpson. If you were to travel back to this day, notable figures such as Robert Reed, Anthony Perkins, Audrey Hepburn and Thurgood Marshall would all be still alive.

On TV, people are watching popular shows such as "Only Fools and Horses", "'Allo 'Allo!", "Blossom" and "Step by Step". Meanwhile, gamers are playing titles such as "The Simpsons: Bart vs. the Space Mutants", "Super Castlevania IV", "Teenage Mutant Ninja Turtles III: The Manhattan Project" and "Street Fighter II: The World Warrior". Children and teenagers are currently watching television shows such as "The Smurfs", "Adventures of the Little Koala", "In Living Color" and "Rosie and Jim".

If you are looking for some childhood nostalgia, then check out February 25th, 1998 instead.

George W. Bush Snr. was the President of the United States on February 25th, 1992.

John Major was the Prime Minister of the United Kingdom on February 25th, 1992.

Enter your date of birth below to find out how old you were on February 25th, 1992.

Here are some fun statistics about February 25th, 1992.