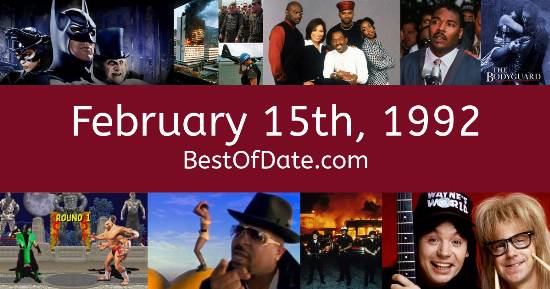 Songs that were on top of the music singles charts in the USA and the United Kingdom on February 15th, 1992.

The date is February 15th, 1992 and it's a Saturday. Anyone born today will have the star sign Aquarius. Currently, people are enjoying their weekend.

Valentine's Day of 1992 has just passed. In America, the song I'm Too Sexy by Right Said Fred is on top of the singles charts. Over in the UK, Goodnight Girl by Wet Wet Wet is the number one hit song.

George W. Bush Snr. is currently the President of the United States and the movie Medicine Man is at the top of the Box Office. In the United Kingdom, John Major is the current Prime Minister. Texting is not a thing yet. Instead, people are using landline phones and pagers. Furthermore, the vast majority of people still have no idea what "the Internet" is.

Boxer Mike Tyson has recently been found guilty of the rape of 18-year-old Desiree Washington in Indiana. He is currently awaiting sentencing. The Democratic Party presidential primaries have kicked off in Iowa. Bill Clinton, Jerry Brown, Tom Harkin and Paul Tsongas are among those hoping to become the Democratic Party's nominee for this year's election against George H. W. Bush. In Ireland, Albert Reynolds has become the new Taoiseach. His appointment follows the recent resignation of Fianna Fail leader Charles Haughey over a phone-tapping scandal.

The trial of four police officers for the 1991 beating of Rodney King back is currently taking in Simi Valley, California. The comedy film "Wayne's World", starring Mike Myers, is currently showing in movie theaters. In Milwaukee, serial killer Jeffrey Dahmer has just been found guilty and sentenced to life in prison.

If you were to travel back to this day, notable figures such as Robert Reed, Anthony Perkins, Audrey Hepburn and Thurgood Marshall would all be still alive. On TV, people are watching popular shows such as "Cheers", "'Allo 'Allo!", "The Wonder Years" and "In the Heat of the Night". Meanwhile, gamers are playing titles such as "Battletoads", "The Legend of Zelda: A Link to the Past", "Super Castlevania IV" and "Teenage Mutant Ninja Turtles III: The Manhattan Project".

Children and teenagers are currently watching television shows such as "Danger Mouse", "Full House", "Count Duckula" and "The Adventures of Pete & Pete". Popular toys at the moment include the likes of the Easy-Bake Oven, My Little Pony (figures), Yo-yo and the Super Nintendo Entertainment System (SNES).

If you are looking for some childhood nostalgia, then check out February 15th, 1998 instead.

Twitch streamer.
Born on February 15th, 1994
He was born exactly 2 years after this date.

George W. Bush Snr. was the President of the United States on February 15th, 1992.

John Major was the Prime Minister of the United Kingdom on February 15th, 1992.

Enter your date of birth below to find out how old you were on February 15th, 1992.

Here are some fun statistics about February 15th, 1992.